Another year of climate change, genetics and Irish scientific ambition 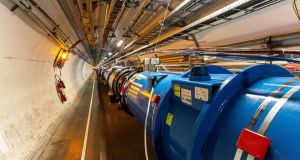 Here we are at the end of yet another year, a year that definitely went by faster than the year before or for that matter the year before that. And as ever at this time of year ‘tis the season for casting ahead and divining what the future holds, delivering lists of top 10s and predictions of what will be hot and what will not.

In some fields, the resultant list will look very much like something delivered by the toss of a coin, but in the science and research areas it is pretty certain what will land in the top two or three subjects.

Number one has got to be climate and the impact of global warming. There is no other area that can match it for the variety and depth of research activity being applied to a whole range of climate-related subjects. And the hard news stories keep tumbling out of this endeavour, helping to show that global changes are taking place due to the alterations in climate that we as humans have set in motion.

One peer-reviewed study about the increasingly rapid loss of ice mass over Greenland was published less than a fortnight before Christmas. It showed that the biggest block of land ice in the northern hemisphere was melting away much faster than expected, seven times faster the study suggests.

This is just one story and one research area, but climate-related studies arise in many fields from alteration of ocean currents to changed rainfall patterns and from species loss to poor air quality. It is also a subject area that affects us all given the potential of coastal flooding, crop losses and human migration to name but a few possible future impacts.

The impacts for humanity are also there in research into new ways to alter our genetic blueprints. The key to unlocking the potential to overcome gene-based diseases relates CRISPR CAS9, our current best technology for getting into the genome and then adding, deleting or altering individual genes.

It has the potential to reverse disease states by correcting unwanted mutations. It is being used in labs around the world as scientists seek to fully understand the method and apply it to alter genes. It is a powerful research tool, for example to create a mouse model that imitates a human disease state and then developing and testing drugs that might be used in humans. It also allows the researcher to look for any unwanted downstream effects arising from genetic alterations.

There are so many scientists using the CRISPR tools that news reports and discoveries will certainly follow. Yet most research scientists are concerned about the lack of controls or limits on what kind of genetic experiments that might be conducted on the human genome. Too little is known about unexpected problems if a number of genes are altered to eliminate a genetic disorder.

There is also the issue of genetic alteration of the germline, the genetic material that moves across to the next generation. There is currently an international block on germline alterations but that has not stopped at least one researcher who went ahead and created the world’s first two genetically modified humans. Breakthroughs will be delivered all through 2020 it is probably safe to say.

What might come third in this short list is up for grabs, and what might produce the next big scientific discovery could come from any direction. For that reason this report becomes a “wish list” relevant to Irish research and scientific endeavour related to our engagement with important international research bodies.

One of the most important decisions in this regard brings us closer to membership of Cern, Europe’s premier nuclear research body. A Dáil committee studied the research and commercial potential arising from membership and called on the Government to join Cern as quickly as possible.

Cern’s huge atom smasher confirmed the existence of the Higgs Boson, an international effort that involved many countries. Ireland could become more involved in this kind of research if it were a member. The Government has already taken the leap and announced our membership of the European Southern Observatory.

Our astronomers and physicists can now get access to some of the world’s largest telescopes based in Chile. The ESO is also a mill for discoveries and this membership gives us the potential to become international players in this field. And in more familiar territory, the Government has renewed its commitment to invest €100 million in the European Space Agency between now and 2024, a decision that ensures Ireland can bid for commercial contracts and researchers can participate in ESA activities. Our investment pays for itself given Irish companies can share in contracts.

All of the research areas mentioned here show how important it is to internationalise Ireland’s involvement in science. By doing this, we give more opportunities to promising young Irish scientists and help build a strong international reputation for research. Certainly that is not too much to ask for this Christmas.