‘We would develop a system ourselves and so Obbi was born’ 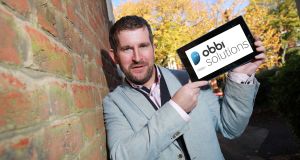 Four years ago, frustrated at being unable to find an all-in-one solution for managing key business processes, Gareth Macklin took the unusual step of deciding to develop his own. This was a big undertaking, but not as big for Macklin as it might have been for others as he had the expertise and resources of his family-owned business, the Macklin Group, behind him. The group employs 650 people across Northern Ireland in healthcare, construction and hospitality and Macklin tapped into both the technical and commercial know-how of its senior team to develop what has now emerged as Obbi Solutions, a standalone enterprise software company whose launch product integrates critical business processes such as compliance, HR, and health and safety.

“There are existing platforms that deliver individual solutions for areas such as health and safety and facility management, but Obbi is the first to provide a single platform that deals with all of them and makes their related information available anytime, anywhere, on any web-enabled device,” Macklin says. “Our system also improves productivity and allows people to do things better and faster while also delivering peace of mind around compliance for employers.

“Obbi’s innovation is driven through a five-point methodology called ‘Leapp’ which brings together learning, engagement, audits, productivity and protection as one package,” he adds. “In doing so, we are solving several problems, including on-boarding, training and engagement, checks, quality assurance, incident management and risk mitigation. Obbi turns the waterfall model on its head by giving employees the tools needed to fulfil their various roles and tasks meaning compliance is driven from the bottom up.”

Obbi’s sweet spot is organisations with between 100 and 3,500 staff across all sectors and Macklin says the company’s cloud-based platform can reduce the time spent on administration by up to 75 per cent and staff turnover by up to 22 per cent because it makes it easier for people to do their jobs. This in turn makes them happier at work.

Obbi Solutions was launched in October 2018 and now employs 10 people with clients in manufacturing, hospitality, retail, construction and healthcare. The system has over 4,500 active users across multiple sites mainly in Northern Ireland and the Republic with its first customers in the UK now coming onstream.

‘Ahead of the curve’

Macklin says part of the reason he decided to build the system was because he felt forward-thinking companies should be doing more than meeting minimum requirements in areas such as health and safety, and staff engagement. “We wanted to be ahead of the curve and searched the UK, Europe and eventually worldwide for a single solution to give us peace of mind but we were unable to find one that ticked all the boxes,” he says. “We also spoke to a lot of people and found they had the same problem. On the one hand, we were frustrated at not being able to get what we wanted, but on the other we saw it as an opportunity because there was clearly a gap in the market. I decided we would develop the system ourselves – by operators, for operators – and so Obbi was born with a play on the word ‘obligation’.”

Over the next 18 months, the company will be focusing on building its client base in Ireland and the UK and its main route to market is through referrals from professional service providers such as accountants and lawyers. However, its five-year plan is to move into international English-speaking markets as Macklin says business-process problems are universal.

The scale of investment in the business to date has been in the order of €750,000 which has been self-funded with support from Invest NI. Obbi will charge users an annual licence fee based on the number of staff using the system.