Goodbye to all that creative destruction

In 16 years of columns on business, the only constant has been disruptive innovation 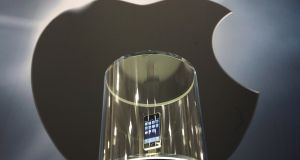 Apple’s first iPhone at the launch in 2007: “Sixteen years ago, this would have been difficult to imagine, given that China was much poorer and the iPhone and phone apps had not been invented”

One Financial Times article that caught my eye this week concerned the success of Meituan Dianping, whose “Everything app” enables Chinese consumers to have their meals delivered, review and book hotels, and even order at-home massages. After the company’s revenues rose by 44 per cent in the third quarter, it is now worth about $75 billion (€67.5 billion).

Sixteen years ago, this would have been difficult to imagine, given that China was much poorer and the iPhone and phone apps had not been invented. But, as Karl Marx and Friedrich Engels observed in the Communist manifesto in 1848, “The need of a constantly expanding market for its products chases the bourgeoisie over the entire surface of the globe.”

I do not pick 16 years at random: I started this column in 2003 and this will be the last one. It is more au revoir than goodbye since, after a sojourn in Tokyo with Nikkei Asian Review, I will return next year to a new column about business from the point of view of consumers and citizens.

As the end of the year and this column coincide, it is a good moment to reflect on what changed in that decade and a half. Quite a lot, naturally. The month I started, for example, the Recording Industry Association of America filed 261 suits against fans for illegal music downloading. It was desperate then, but the industry thrives again, thanks to Spotify and streaming.

The month I started, for example, the Recording Industry Association of America filed 261 suits against fans for illegal music downloading

The only constant has been disruptive innovation, the term used by the management author Clayton Christensen in 1995 to describe how incumbents are bypassed by technology upstarts. Rapid technological change was accompanied by globalisation and (until recently) lowering of barriers to trade. Innovators such as Facebook, Google and Uber sprinted around the world.

Marx and Engels wrote at a similarly protean time for enterprise, during the Victorian era of globalisation. They did not approve, but they recognised its revolutionary appeal: “The bourgeoisie, by the rapid improvement of all instruments of production, by the immensely facilitated means of communication, draws all, even the most barbarian, nations into civilisation.”

Similar changes brewed as I wrote in September 2003 on finance: “It could be the little guys - at hedge funds and investment boutiques - who emerge the stronger.” I later wrote of credit default swaps (with unknowing irony) that “complaining about the growth of the derivatives market is as futile as protesting against a rising tide”.

On pharmaceuticals: “Science, patent law and the stock market are ensuring that Big Pharma does more than simply rework old hits.” On film and television, during Comcast’s unwanted approach to Walt Disney in 2004: “The old ways of delivering [CONTENT]- those that suited studios and networks - are losing ground to methods that this generation of consumers prefers.”

None of this was visionary, and I got some things wrong, including calling for Lehman Brothers to be allowed to fail in 2008, and being complacent this year about two Boeing 737 Max crashes. The significance of other events, such as the US opioid epidemic, passed me by. But the pace of change across many industries could not be ignored.

Nor could anyone fail to notice the cornucopia of new products and services, topped by the iPhone in 2007, and an eruption of wealth in emerging regions including Asia and the Middle East. That year, I was in Dubai, “standing in the local franchise of Trader Vic’s, the California Hawaii-themed bar, with a Mai Tai cocktail in hand, watching people dance to a salsa band.”

The tumult was spurred on by advances in science and technology, from machine learning and artificial intelligence to genetic medicine. The human genome map was completed in 2003 and cancers are now treated with immunotherapy drugs such as Merck’s Keytruda. Taxis can be summoned on apps; in another 15 years they may drive themselves around.

The unleashing of finance led to the 2008 crisis and encouraged corporate rootlessness, with profits being moved to low-tax jurisdictions

But this whirlwind of enterprise had a cost. The unleashing of finance led to the 2008 crisis and encouraged corporate rootlessness, with profits being moved to low-tax jurisdictions. Labour’s share of national income has fallen in many countries, with casual contracts becoming the norm as the power of capital has been enhanced.

The abundance of stuff, from fast fashion to cheap flights, has caused a backlash against environmental damage, with global warming heading young people’s worries. Growth through what the economist Joseph Schumpeter dubbed “creative destruction” of inefficient companies should not concern us; growth that involves the destruction of the planet is frightening.

Businesses adapt to regulation and changing demand, of course. Energy companies are turning to alternatives and vegan disruption of the hamburger led this week to International Flavors and Fragrances’ $26.2bn deal for DuPont’s nutrition and biosciences business. The merged company hopes to make meatless burgers with the texture and scent of the real thing.

This consumer revolution will offer plenty to chew over on my return next year. Meanwhile, thank you for reading and Merry Christmas. – Copyright The Financial Times Limited 2019