Technology developed by Belfast-based company may enable much earlier diagnosis 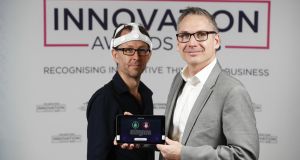 Revolutionary new technology developed by Belfast-based BrainWaveBank has the potential to enable much earlier diagnosis of Alzheimer’s and other degenerative brain diseases with a view to facilitating earlier and, hopefully, more effective treatment of these conditions.

“If you look at neurodegenerative diseases like Alzheimer’s there is no cure but there are some promising treatments out there if they are caught early enough,” says BrainWaveBank chief executive Ronan Cunningham. “At present, the only way to diagnose these conditions is through PET [positron emission tomography] scans or spinal taps. These are very expensive and are not widely available nor are they easily accessible for patients.”

BrainWaveBank technology addresses these difficulties with what Cunningham terms “a Fitbit for the brain”.

The company has taken proven science out of the laboratory and applied the latest sensor, connectivity, and mobile phone app technology to develop an electroencephalography (EEG) device to monitor brain function and in the patient’s own home.

The portable EEG is a lightweight headset comprising 16 sensors which are connected to a smartphone via Bluetooth. The patient wears the headset for 15 minutes a day while playing games on an app designed by the company that tests different aspects of cognitive function including memory, decision making and executive function. Responses to this gameplay are recorded and compared with a database of known responses and a detailed picture of the individual’s cognitive health is built up over a few weeks.

The technology has been proven in a number of demonstrator trials

The phone app can also interface with devices such as Fitbits and other health trackers in order to add lifestyle information to the brain function data. “By adding lifestyle information such as how well the person has slept or how much caffeine they have consumed that day we can put the data in context to deliver a much better assessment of their cognitive health,” Cunningham says. “A person might just be tired during a particular week and that might explain what appear to be symptoms of a neurodegenerative disease.”

Importantly, the technology has been designed for ease of use.

“We recently completed a 90-person trial with patients aged up to 79 years old. We were able to get very high-quality EEG data after just a few minutes training. Ninety per cent of the participants said they found it very easy to use at home on their own. Our ultimate goal is to have no training at all required. We will just pop the headset and instructions in an envelope and people will be able to get going on their own.”

The technology has been proven in a number of demonstrator trials and the company has just been asked by the Northern Ireland Department of Health to work on research into pre-psychosis in teenagers.

“We are still pre-revenue at the moment and we are looking at entering the commercial market next year,” says Cunningham. “We have four trials ongoing in the area of mild cognitive impairment and we are in active discussions with a number of contract research organisations to utilise our technology in their trials.”