Genome editing is a revolution that is arriving fast

Dick Ahlstrom: It will be possible for labs to make ‘corrections’ to eliminate the risk of gene-based diseases even before birth 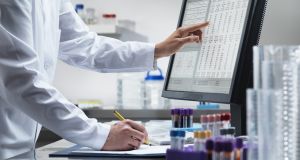 There are a number of methods used to edit the DNA of any organism, and it is possible to be highly specific and precise when you go in to make a genetic change

A quiet revolution is under way in laboratories across the developed world, one that has the potential to do nothing short of altering the course of human evolution. It is a technology that allows researchers to get inside of our cells and change our DNA, the very blueprint of life on this planet.

Using the technologies that support this, known generally as genome editing, scientists will soon be able to knock out gene-related diseases such as cystic fibrosis and Huntington’s disease. It will be possible for labs to make “corrections” to a fertilised embryo or eggs or sperm cells to eliminate the risk of gene-based diseases even before birth.

The methods used to accomplish this already exist, so this is a revolution that won’t be a long time coming. Massive money from international companies is already being spent as companies seek to acquire research-based firms who have developed potential new treatments that have strong market potential. Only last month Swiss pharma giant Novartis announced it was to purchase Chicago-based gene therapy firm AveXis for $8.7 billion (€7.23bn).

In February US drug-maker Gilead Sciences announced it would use Sangamo Theraputeics’ gene-editing technology to develop new cancer treatments. This could be worth $3 billion to Sangamo, the companies said. Citi GPS suggested last November that the genome editing market would be worth $10 billion by 2025. but the prediction seems decidedly conservative when looking at the heavy duty deals now being struck between companies and academic researchers involved in this emerging technology.

You might assume that genome editing – genome, by the way, means the complete set of genetic material found in any organism – and the profound changes it may bring demands expensive equipment and extremely well trained scientists to run it, but this is not the case.

It is tougher than making bathtub gin but a graduate student of biochemistry should be able to accomplish gene editing using readily available equipment. This means that less well off countries and companies can afford to pursue this science so it is not exclusively in the hands of the big corporates.

There are a number of methods used to edit the DNA of any organism, whether it is a plant, animal, bacteria or human, but they all share a major attribute – it is possible to be highly specific and precise when you go in and make a genetic change.

Plant and animal breeders have been making genetic alterations for 10,000 years at least but it is a blunderbuss approach with unpredictable results. The latest techniques – for example CRISPR-Cas9 one of the most powerful – provide molecular “scissors” that can add, delete or change a single gene with absolute accuracy. There is nothing haphazard about genome editing.

And it could not be otherwise given the risk of downstream unintended alterations that could manifest themselves immediately or in one or three or five generations hence.

For this reason countries around the world have blocked the alteration of embryos, human eggs or sperm. Changes to these would result in a permanent alteration that would be carried forward in subsequent generations. And yet, as seen with dodgy, unproven stem cell treatments being offered with extravagant claims for “cures”, we are certain to see companies springing up offering promises of cures by using genome editing.

The Royal Irish Academy last week held an event at which genome editing, its potential and the ethical implications were discussed. It was clear that the technology has massive potential to do good in areas such as human health, animal husbandry and agriculture. Yet we will likely see charlatans making promises that likely can’t be met in delivering “enhancements” such as hair colour, height or physical capabilities.

We currently have no legislation preventing this, but the Assisted Human Reproduction Bill 2017 is in Committee Stages in the Oireachtas. We are years behind other EU countries in legislating for long established practices in in vitro fertilisation, but there are a few elements relevant to genome editing, including regulation of use of sperm, egg or embryo for research.

We will also have an independent regulatory authority for assisted human reproduction when the Bill comes into law this year. Irish researchers are also involved in this research, and numbers will grow as the technologies advance.

The question is will the technology just start a new debate similar to the debate over genetically modified organisms (GMOs)?

GMOs were developed prior to the introduction of CRISPR-Cas9, and techniques then were less specific that what is now available. Will we still seek to ban GMO products in Europe if the changes to the genome of, say, potatoes is so subtle that it cannot be found?

There is another factor at play, however. When GMOs were the issue there was the Monsanto company to accuse and blame. When the debate over genome editing begins there will be many billion dollar companies who will throw their financial weight behind use of the technology and seek to smooth its path forward.