Stephen Hawking was an arch communicator despite his disabilities

Renowned British physicist Stephen Hawking has died aged 76. Hawking, who was diagnosed with motor neurone disease at 21, was famous for his understanding of space and the sub-molecular world of quantum theory. Video: Nasa 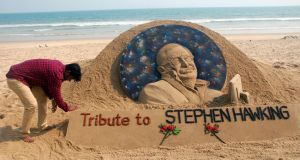 It was gratifying to see large-scale media coverage of the death of the famous physicist Stephen Hawking. Those less interested in science may well have wondered what allowed Hawking to achieve rock star status given the man was immobile for most of his life, trapped in a body left unresponsive due to motor neuron disease.

It was his luck – or his curse, perhaps – that he developed a form of MND that allowed him to survive for decades. Most who get the disease only last a matter of years and sometimes less. There was a heavy physical toll demanded of Hawking who lived his life bolted to a range of technologies that helped keep him alive and also allowed him to communicate with what for him would have been the outside world.

It is the opening of this channel of innovative thought between us and this creative genius that we celebrate on his death. He worked in one of the most obscure and difficult of fields – trying to understand how the universe came into existence – and yet Hawking’s physical challenges could not halt the stream of innovative theories and new thought that flowed from him to us through the smallest of channels, the twitch of a muscle.

This allowed him to piece together words and sentences, numbers and characters, streams of information that he assembled into complex theories about the universe and how it came to be the way we see it today. The subject matter is staggeringly complex but Hawking was an arch communicator despite his disabilities. He would devise fresh possibilities and new ways of looking at the structures we see in the universe and developed them into theories, explanations and mathematical calculations of why things are the way they are. These theories in turn would then be sent back through the channel where they could be reconstituted into meaningful theories.


In this way he became a remarkably effective public lecturer and was constantly in demand with requests from around the world. His voice came to be instantly recognisable whether you were into science or not. Such was his notoriety he made an appearance on the popular Simpsons animated TV show.

He spent a great deal of time doing talks and presentations that reached out to people and wrote a book to help people understand his research, A Brief History of Time. It spent months on bestseller lists and was translated into dozens of languages, but was generally acknowledged to be something of a challenge to read.

Innovation is woven into the life of Stephen Hawking. Innovation helped with the development of life support technologies for him and opened up communication channels allowing his ideas to take flight beyond where his mind could venture. He himself is a font of innovation as seen in his novel ideas that help us better understand the universe and its evolution.

His most famous theory relates to something that will carry his name forward into the coming generations of cosmologists, Hawking-Bekenstein radiation. He theorised that while black holes at the centre of galaxies were best known for their ability to suck all nearby matter into their staggeringly powerful gravitational pull, there must still be some escape of energy from a block hole, causing it to shrink over time and eventually disappear. This is the radiation that now carries his name, but it remains as a theory until some scientist working in years to come finds a way to see and record the Hawking-Bekenstein radiation.

This was but one of the ideas developed by Hawking during his professional career at Cambridge. Now imagine, if you can, what it must have been like, your mind brimming with ideas and theories and possibilities that would remain locked inside your head were it not for Hawking’s determination to keep talkingeffect and reaching out.

Not many people will understand Hawking’s efforts to unite gravity and quantum mechanics under a single unified theory, but they certainly should remember him for how his use of innovative technology allowed him to innovate as a scientist, in the process creating new thinking.