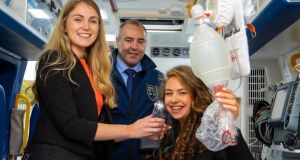 A new invention, which could reduce the volume of clinical waste in a healthcare emergency by up to 67 per cent, has won the 2019 national James Dyson Award.

Invented by two NCAD students, Máire Kane (22) and Hannah Grogan (22), the ‘Personal Patient Pack’ (PPP) eliminates waste resulting from the single use of medical devices such as oxygen masks, allowing for them to be reused multiple times.

They learned that in a typical emergency callout, paramedics can use numerous separate devices such as plastic masks or nasal tubes on the patient. Upon arrival in an emergency department, these devices are dumped and replaced with brand-new identical devices. The process can be repeated each time the patient is moved to a different department or ward, increasing the volume of plastic waste that impacts the environment.

The PPP transports an individual patient’s items in its bespoke sterile pockets, so they can be reused multiple times, dramatically reducing the quantities of medical waste. The pack follows the patient on their healthcare journey from ambulance to emergency department to hospital ward.

Each pack is fully traceable to the patient through an embedded radio frequency identification tag (RFID). Patient details are taken by the paramedic and input on an iPad, which scans the pack using an RFID reader and sends the details to the hospital in real time.

Operations director at Medicall Ambulance Service Andrew Lyle says the PPP could seamlessly become part of the patient transport routine as patient information is already input by paramedics on tablet devices and ambulances have wifi on board.

When the patient is discharged, the pack can be put in the existing hospital laundry bin as the polycotton material (the same material used in nurses’ and doctors’ uniforms) can withstand the high laundry temperatures needed to eliminate germs.

Both students receive €2,200 prize money from the James Dyson Foundation and their PPP invention proceeds to the international stage of the 2019 James Dyson Award along with two runner-up Irish student inventions – Smart Gluco and Checkkit.

Smart Gluco, invented by Orla Murphy from the University of Limerick, is a wearable insulin pump for type-one diabetics, which eliminates the risk of insulin blockages by removing the need for cannulas.

Checkkit, designed by Daniella Kaligorsky from Technological University Dublin, is a new toolkit which simulates the physical symptoms of breast cancer to promote early identification of breast cancer by educating users on self-examination.

The three Irish inventions will now compete with student inventions from 27 countries to win the €35,000 global award, which will be announced in November.