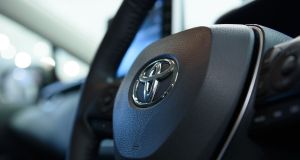 The Toyota Daily Rental app operators hope to have some 500 cars available for rental by next March. Photographer: Akio Kon/Bloomberg

With the launch of the Toyota Daily Rental app, we appear to be moving another notch closer to a shared and leased ownership model for cars in Ireland.

The new app, which is operated by Fleet App in co-operation with Toyota Ireland, is pretty simple on the face of it: sign up, input your location and the app will give you a list of cars, all available to rent by the day or by the month from a nearby Toyota dealer.

The app is the brainchild of Maurice Sheehy, who previously launched the Fleet app in Ireland, which allows uses to micro-rent private cars from individual owners, rather in the manner of Airbnb, only with wheels.

The Toyota app is a little more sophisticated and broadly based. “The average rental period for our existing Fleet app is 3.7 days” Sheehy said. “The Toyota Daily Rental app has a much wider usage model, and it allows us to break into the corporate and company market. We can certainly see that there’s a change in consumer behaviour going on right now, and that there’s an appetite for it.”

The app had a ‘soft launch’ in August, to lay the groundwork in terms of demand and pricing. That pricing is currently still down to the individual Toyota dealership to decide. “Pricing is up to each dealer,” said Sheehy. “We’ll adjust the prices as we go along, and it will vary from location to location. In the next few months we’ll have a better idea of what works best and we’ll start to issue recommended pricing.”

By way of example, at the time this piece went to press, you could have rented a 2018 Toyota Auris from a dealer in Cork city for €38 per day, or a new C-HR crossover for €43 per day. Vans and commercial vehicles are also available through the app.

The app’s potential advantage over rivals is that it allows cars to be rented, effectively leased, for a month, or even many months. This, says Sheehy, gives the app the chance to enter the company car market, as it will allow firms to provide cars or vans to temporary or short-term employees, or to employees on probation, without the risk of having a depreciating asset permanently on site.

However, as it stands, the monthly cost looks prohibitive for individual users looking to sidestep the usual hassles of purchase and ownership – even when insurance and maintenance fees are included in the cost, a monthly rental price of €1,656 for a new Corolla looks pretty steep. Perhaps that is one of the prices that will have to be adjusted in the face of experience.

The app does offer one other significant advantage – its age range. Drivers as young as 20 can use the service, as long as they’ve held a full licence for at least one year. The Daily Rental app is also seen as a complement, rather than a rival, to Toyota’s own in-house Yuko car-rental service. Where Yuko is designed around on-street pick-ups and drop-offs, and for rentals of hours or even minutes, the new app is focusing on longer-term rentals of at least one full day or more.

By next March, Toyota Daily Rental hopes to have some 500 cars available for rental at any one time, and it has already had 160 bookings through the system on the soft launch. “The subscription model this app is pioneering helps free people from long-term contracts,” said Sheehy. “Above all, this service ties into our vision of flexible transport provided on your own terms, affording you the freedom to avoid owning a car full-time.”