Average age of founders of functioning US companies is 42, researchers say 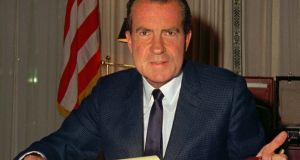 President Richard Nixon, a firm advocate for greater environmental protections, was 57 when he signed the US Clean Air Act into law in December 1970. Photograph: AP Photo

Pop quiz! Which US president did more for the green movement than any other? Jimmy Carter? Bill Clinton? Barack Obama? Nope. It wasn’t even a Democrat.

On December 31st, 1970, president Richard “Tricky Dicky” Nixon signed into law the Clean Air Act, which the US Environmental Protection Agency says is a “landmark piece of legislation that has led to significant environmental and public health benefits” across the US. The law, the EPA says, was intended “to foster the growth of a strong American economy and industry while improving human health and the environment”.

Nixon was a firm advocate for greater environmental protections, saying at the time: “I think that 1970 will be known as the year of the beginning, in which we really began to move on the problems of clean air and clean water and open spaces for the future generations of America”.

While Watergate and Vietnam will forever be Nixon’s calling cards, many in the US will begrudgingly admit it was a Republican who lay the foundations for significant progress to be made in a number of key environmental areas.

Another more recent misperception that has somehow grown to be widely accepted – at least until now – is that most successful tech entrepreneurs are far younger than the really are. I’m not sure who started this rumour, or why, but it’s not only ageist, it’s false.

Using data from the US Census Bureau and the Internal Revenue Service, Massachusetts Institute of Technology Sloan professor Pierre Azoulay and PhD student Daniel Kim found the average age of business founders who had not only started companies (anyone can do that) but had gone on to hire at least one employee, is 42.

Breaking their analysis of government-generated data into individuals who had been previously employed in high tech, venture capital-backed firms and patenting firms nationwide, the MIT researchers reveal the average founder ages were respectively 43, 42 and 45.

They also found that entrepreneurs were more likely to become successful if they were already employed in the tech sector within which they started their own business. In other words, the person who decides to set up a business after developing new telecommunications technology after working at Vodafone for the previous 10 years is a far more likely success story than the 20-year-old college dropout – with little or no market experience – a stereotype which has gained so much currency in recent times.

Perhaps it is because it’s more fun to think of the occasional outlier as being representative of the norm in one industrial, social or cultural setting than another. So how come we don’t believe most successful doctors are too young to vote before they make it in the medical profession? In 1995, 17-year-old Balamurali Krishna “Bala” Ambati made the Guinness Book of World Records as the world’s youngest doctor. Isn’t that proof enough that all doctors are 17?

My guess is that tech has many up-and-coming 17-year-old spin doctors but few who could successfully treat your phlebitis. The inflammation of the walls of one of Nixon’s veins in 1974 was what prevented him from being present in court while under subpoena for the trial of former aides discovered to be key figures in the Watergate scandal.

His illness, while poorly timed, was very real but it didn’t stop the Washington Post from publishing a cartoon showing Tricky Dicky with a cast on the wrong foot.

Nixon was 57 when he signed the Clean Air Act into law – old enough to have founded at least a two or three successful tech firms, right? No, it’s not that simple. Age and success don’t necessarily correlate the opposite way either. But to quote the MIT student and co-author of the aforementioned study, Daniel Kim: “In theory, we know that with age a lot of benefits accumulate . . . You get a lot of human capital from experience, you also get more financial resources as you age, as well as social connections, all of which will likely boost your odds of success as an entrepreneur.”

It shouldn’t take a college student’s conclusions to make us realise that the more time one spends doing something, the more likely it is that one’s experience will translate into success.