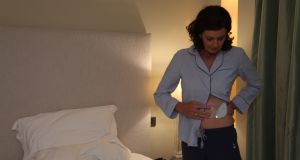 The entrepreneurs that typically hit the headlines are those whose businesses make it big fast, but for most start-ups the road to success is long and takes a combination of a good idea, dogged determination and a lucky break.

For PMD Solutions, makers of RespiraSense, the coronavirus has been the catalyst that has propelled it centre stage nine years after its founder Myles Murray first began working on the idea as a final year engineering student at Cork Institute of Technology.

What he has since developed, and is now being used to treat coronavirus patients at Beaumont Hospital, is a remote respiratory monitoring device that can detect a change in someone’s condition before it becomes a problem. The patented technology, which is aimed at general ward care, measures the mechanics of thoracic and abdominal breathing patterns to identify deteriorating trends.

“Our motion-tolerant technology can make an immediate and positive contribution to treating Covid-19 patients in a hands-off way, thereby reducing the risk to healthcare workers while also helping medics by highlighting which patients are most in need of escalated care,” Murray says.

“It allows doctors to look at groups of people and quickly determine those likely to be suffering from Covid-19 symptoms, allowing them to use their limited resources better throughout the health system. Its remote delivery also maintains the integrity of isolation areas in hospitals.”

The inspiration for RespiraSense came when Murray was introduced to Stephen Cusack, professor of emergency medicine at University College Cork.

“Stephen was seeing people in A&E with chest tightness and breathing difficulties, and it was a continual challenge to monitor their breathing,” he says.

“When a person is very ill a change in their breathing can be a vital indication of a deterioration in their condition. As of now the main method of assessing a change is observation by clinical staff. I discovered this was a worldwide problem for clinicians, and given that respiratory rate has been shown to be the earliest and foremost indicator of a problem, I felt a solution needed to be found and that combined human skill with smart technology.

“My vision was to create a new industry standard in patient breathing monitoring while delivering a measurable economic benefit to the healthcare community,” says Murray.

“The idea behind the product was to support a shift from interventional therapy to preventative monitoring. This shift is happening in healthcare systems all over the world, and is being driven by an ongoing need to reduce adverse events and associated costs.”

Murray has spent around €6 million developing RespiraSense to the point where he believed the product is as good as it can be in terms of effectiveness and ease of use.

“We’re on the third generation of the product now, and it has been CE marked each time so it has been through a lot of rigorous assessment and testing,” says Murray, who raised €1.5 million from private investors in January to expand into the Middle East before the pandemic hit.

The main element of the RespiraSense solution is a discrete, wireless sensor pad which is attached to the patient’s ribs. The pads are sticky and are single-patient, single-use, but the sensors’ electronics are reusable.

“There is great patient compliance with the product as it’s small and not at all uncomfortable to wear,” Murray says. “The sensor is as flat as a Band Aid and the reusable device fits into the palm of your hand. The device is worn by patients continuously for up to four days so patient comfort was a very important part of our design thinking.”

One of the potential glitches with remote monitoring is false alarms, but Murray says this is not an issue with RespiraSense.

“Patients breathe within different ranges, and applying standard alert thresholds could indeed create nuisance alarms. This is why we are using continuous monitoring of respiratory rate instead. If the rate of breathing goes up over time it is a significant predictor of the need for escalating care. Likewise, if it’s going down this can indicate a treatment is effective.

“It is the combination of spot checks and trend data that makes RespiraSense invaluable in getting the right patient the right treatment at the right time.”

While treating coronavirus is uppermost in people’s minds at the moment, RespiraSense’s technology is applicable in numerous other treatment settings because breathing is a disease agnostic indicator of how well the body is coping.

“Sepsis is a great example of its use in another setting,” Murray says.“With sepsis every 30-minute delay in treatment increases the risk of mortality by 7 per cent, and when we think of infection we automatically think of temperature, but there is no temperature response in the early stages of sepsis in 60 per cent of cases. However, there is always an upward trend in breathing.

“In any acute situation the monitoring of breathing is essential. For example, in the case of pulmonary oedema, Danish studies using RespiraSense have shown that our technology detected a deterioration in the patient’s condition 6-12 hours earlier than standard care and before other vital signs began to indicate distress. RespiraSense is also certified for sleep apnoea diagnostics.”

RespiraSense can be used in both hospital settings and by individuals in the community, but right now the focus in on rolling it out in healthcare facilities.

“As an early-stage company we wanted to prove the technology in a clinical environment first,” says Murray, whose company was named visionary innovation leader for non-invasive respiratory monitoring by research and consulting firm Frost & Sullivan in 2018. “However our goal is to increase our footprint through partnerships so more and more respiratory devices will have RespiraSense ‘inside’ as the gold standard for both monitoring and diagnostic applications.”

RespiraSense employs eight people including two in the UK where the company’s pilot site is located at the Chase Farm Royal Free Trust Hospital in north London and PMD Solutions is on an accelerator programme that will fast-tracing the adoption of RespiraSense by the NHS.

Inquiries about the product have skyrocketed since the coronavirus crisis started to bite, and Murray says the company is expecting to ship significant amounts of product over the next few weeks.

“We do the assembly ourselves and have the capability to scale our output. It has taken us a while to get here, but over the last few weeks seeing our product in use in hospitals to help clinicians make good treatment calls and save lives has made it all worthwhile.”