Aviation industry needs guardrails to return to the air 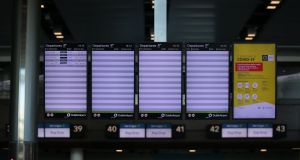 The global commercial aviation industry has virtually collapsed in the past eight weeks as coronavirus has swept across Europe and the Americas. In Ireland this has brought air travel to its knees and in so doing has cut off a vital piece of transport infrastructure.

Being a physical island, and a small open economy that is disproportionately dependent on international trade, this severing of a key link to the world is especially challenging.

It is imperative now that solutions are devised quickly which allow a safe return of air service that can enable a reversal in the steep and rapid decline in Irish economic activity.

The crisis that has unfolded around aviation takes place while Ireland waits for a new minister for transport. This leaves a vacuum in policy making that requires leadership from the industry itself.

Fortunately, a group of highly qualified executives who hold leadership positions in the international aviation market reside in Ireland.

These include the management teams in two highly regarded airlines. Aer Lingus, as part of IAG Group, is one of the strongest carriers entering this crisis. Ryanair is the largest and most powerful low cost carrier in the European market. The largest aircraft leasing companies in the world are located and run from Ireland.

The Irish Aviation Authority, in normal circumstances, manages the enormous daily flow of aircraft moving between Europe and North America.

Dublin and Shannon airports have extensive experience in pioneering pre custom clearance facilities for the US. Dublin airport has established key connections with the three Gulf hubs in Doha, Dubai and Abu Dhabi.

This brains trust has the nous and ability to play an important role in reviving aviation not just for Ireland but for the broader international community too. To do so they need to put aside the usual cut and thrust of competitive engagements and work on a set of protocols that can help assure policy makers and passengers alike that air travel can be conducted safely and efficiently.

Government too has to play a role in steering the aviation industry and providing where warranted liquidity supports to help recover operations hampered by the crisis.

Those protocols have to balance the need to minimise risk from the virus against the deep economic damage caused by a sustained shutdown of the economy. A battery of measures are the likely solution with an emphasis on caution initially and an agreed series of timely reviews to unwind practices that amplify costs.

It is evident currently that any re-start of air services has to be accompanied by protocols that assure the flying public and help contain any surge in Covid 19. Early examples in Asia point to a combination of temperature checks and the wearing of masks from entry at an originating airport to leaving the doors at the destination gateway.

Airport employees and air crews will have to undertake a similar process each day at work. Technology including hand held devices and walk through screens may help manage the flow of passengers and employees during this phase.

Some regulators and airlines are also suggesting empty middle seats as part of the solution set. While this appears of value it may not provide any actual protection as each row on an aircraft separates passengers by no more than one metre.

Additionally, it removes up to 35 per cent of the seat capacity on any short haul flight which makes the economics of operating each sector untenable without a sharp rise in average fares. It is clear that for a period of time the cost of operating an airport and an airline will be elevated by any measures so finding solutions that protect the public while providing affordable flight is imperative.

Getting back in the air is a critical piece of the jigsaw that has to be constructed for the health of the Irish economy. Flights to and from all Irish airports carry visiting friends and relatives, tourists and business people alongside freight.

Unlike large land locked countries that have internal economic combustion and road connections with other states Ireland has a small population that relies on international trade operating from a physical island.

This makes air travel a highly sensitive and important bridge to countries across the world that consume our products and bring invaluable volumes of visitors that support many thousands of jobs in the Republic and Northern Ireland.

Outside the measures that our policy makers can initiate there is a reliance too on how other countries manage air travel to re-open their economies. While tourism is a very important part of the Irish economy it is mission critical in countries such as Spain, Portugal and Greece.

The United States has vast corporations that have strategically valuable facilities abroad, not least in Ireland. The gulf states have built global hubs that connect Asia and Africa with Europe. Practices recommended for Ireland should have an eye on their applicability in these countries too.

Over the coming weeks we could see a set of anti-viral drugs to treat Covid-19 will being approved. Already a vast bank of ventilators, masks and other personal equipment are being constructed for global healthcare providers, along with a battery of tests for the virus and its anti-bodies. These will be in full flow by June while numerous private and state entities are in hot pursuit of a vaccine.

These efforts will create the shield needed to manage Covid-19 while providing the bandwidth to counter any surges in the community. It is against this backdrop that aviation must be given the guardrails that allow it return in steps to what it does best - enabling economic prosperity and employment.

Joe Gill is director of origination and corporate broking with Goodbody Stockbrokers.