Coronavirus: Has the Government’s lockdown project begun to falter? 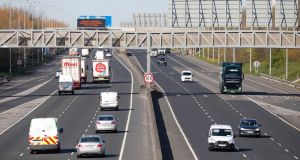 A much reduced rush-hour traffic on the M50 around Dublin during the Covid-19 lockdown. Photograph: Leon Farrell/RollingNews.ie

The public’s adherence to the country’s strict lockdown rules, credited with flattening the infection curve, may be fraying at the edges. There is evidence that lockdown fatigue is setting in and that more and more people are bending the rules and venturing out.

Data collected from a network of on-street cameras in Dublin show that after four weeks of decline, pedestrian footfall across the city rose in the week ending April 12th, officially the fifth week of lockdown. Retailers’ group Dublin Town, formerly Dublin City Business Improvement District, have cameras at 13 separate city centre locations, giving hourly data on the number of people passing or “breaking the beam”.

Footfall was up in 12 of the 13 locations, essentially all across the city.The figures for last week have still to be collated.

Separate road traffic data taken from Dublin’s main arterial routes have picked up a similar trend, with road traffic plummeting during the first five weekends of lockdown, before jumping by 24 per cent last weekend.

The gusto with which the public took to the measures, announced in early March and tightened two weeks later, may be be giving way to a certain frustration. The insidious nature of the contagion, its transmission, and the fact that so many patients appear to be asymptomatic doesn’t help. Neither does the warm, sunny weather.

John McCartney, director of research at estate agency Savills, who compiled the figures, says the Government is trying to balance three tricky objectives in terms of reanimating society and the economy.

And both these objectives have to be balanced with the public’s tolerance of lockdown restrictions.

“There has clearly been enormous social cohesion throughout this crisis and that is still in place,” he says. “However, although it is early days, data from Dublin’s on-street cameras do hint that the Irish public is now beginning to show its appetite for a return to normality,” he says.

Rightly or wrongly, it will become increasingly difficult for the Government to try and enforce social distancing measures if the public starts to push against them .

This might sound callous in the context of the many lives that have been lost and that will be lost in the coming months, but compliance from the wider public can’t be assured for an extended period. There is a deep-rooted history of non-compliance with State measures in Ireland. And this is before we consider the likely accelerant of a severe economic shock, which has its own health implications.

New powers given to An Garda Síochána to arrest people who are not complying with Government policy on social distancing could easily become a flash point.

That’s not to say we’ll see protests like those in the US. While ostensibly protesting the economic costs of the lockdown and the civil liberty infringements, protesters there seem to overlap too closely with Trump supporters and their grievances stretch way beyond containment edicts.

Nonetheless alarm bells are ringing in Government here. Both Taoiseach Leo Varadkar and Minister for Health Simon Harris issued stern warnings over the weekend about complacency undermining the State’s effort to contain the virus.

Pressure is building on the Government to publish a road map on where we’re going, ideally ahead of May 5th – the date on which the current restrictions are due to end. The Department of Finance’s dire forecasts for the economy, contained in the Stability Programme Update, published yesterday, have a built-in assumption that lockdown measures will be enforced for at least 12 weeks. It’s unclear, however, where the starting point is in that equation as the measures came in on staggered basis over three weeks in March. Nonetheless, 12 weeks brings us to June.

The challenge for Government will be maintaining the social cohesion that has brought us to this point. Part of that will involve devising a credible exit strategy, one that people believe is based on a reasonable trade off between health and economics. Mindful that the process maybe ambushed by a second outbreak or by a lack of adequate testing.

Convincing people that there can be no return to normal without a vaccine or a therapy is likely to prove the most difficult element.

News that all mass gatherings of more than 5,000 people are likely to be banned until at least September, effectively clearing the summer calendar of major sports fixtures, concerts and other events, is a case in point.

Many entered the lockdown thinking a finite period of shutdown would deliver a resumption of normal activity, but that’s evidently not going to happen, not while the contagion lingers.

News of secondary outbreaks in Asia and doubts over the immunity of previously infected people have only reinforced the notion that there can be no return to normal for the time being.

Continuing to enforce restrictions on a lockdown-weary population as the full economic cost of the shutdown materialises is going to be a tricky juggle for Government.