Coronavirus may have ended the buyback boom

Controversial practice likely to be out of favour for several years, causing higher volatility 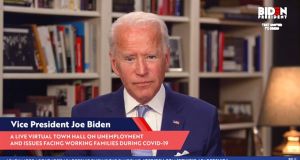 Democratic presidential candidate Joe Biden recently called on ‘every CEO in America to publicly commit now to not buying back their company’s stock over the course of the next year’. Photograph: JoeBiden.com via Getty

Corporate stock buybacks were one of the key drivers of the bull market over the last 11 years, popular with both shareholders and corporate executives. They were among the very first victims of coronavirus – killed off rapidly as companies suddenly felt the need to preserve cash rather than keep shareholders sweet. And they may not be coming back any time soon. In 2018, share buybacks surged in the wake of US corporate tax cuts, soaring 55 per cent to a record $806 billion (€742 billion); and another $729 billion of stock was repurchased by S&P 500 companies in 2019. However, after buying back more than $2 trillion of shares over the last three years, US companies have now turned off the taps as economic and political pressures mount.

It had been thought 2020 might see new records being broken but Goldman Sachs now estimates that buyback activity will roughly halve to $371 billion. Goldman itself has paused buybacks, as have many of America’s biggest banks – including JPMorgan, Bank of America, Citigroup, and Wells Fargo.

Outside the US, similar moves have been announced by a host of names in under-pressure sectors such as oil (including Royal Dutch Shell, France’s Total and Norway’s Equinor) and airlines (Ryanair, Qantas and Deutsche Lufthansa, among others).

Pausing buybacks makes obvious economic sense, given that companies need to preserve cash as their revenues evaporate. However, companies tempted to buck the trend must consider the political as well as the economic landscape. The Airlines for America group is seeking more than $50 billion in government aid, but the fact that America’s biggest carriers spent almost $45 billion in buybacks and dividends over the last five years is a source of ire to many.

According to Bloomberg data, the biggest US airlines have spent 96 per cent of their free cash flow over the last decade on share buybacks.

Similarly, aerospace giant Boeing, which has asked for a $60 billion bailout, spent $11.7 billion on stock buybacks over the last two years.

Such companies won’t be buying back shares any time soon; corporations that have received emergency government aid have been banned from repurchasing their own shares until a year after they have repaid taxpayers’ funds.

“I don’t want to give a bailout to a company and then have somebody go out and use that money to buy back stock in the company and raise the price and then get a bonus,” said Donald Trump. The man who hopes to defeat Trump in November’s presidential election, Joe Biden, went further, “calling on every CEO in America to publicly commit now to not buying back their company’s stock over the course of the next year”. Corporate buybacks helped keep indices afloat during troubled times during the recently-ended 11-year bull market. In fact, corporations have been the only net buyer of stocks since 2009, wrote Canaccord Genuity strategist Tony Dwyer in a recent note.

Jefferies’ strategist Chris Wood is more blunt, saying it means an “end to the phoney earnings growth” generated by buybacks.

Certainly, the practice had been controversial even before the coronavirus downturn catapulted the debate into the political spotlight. Leading Democrat figures have called for buybacks to be banned or restricted, as has Senator Marco Rubio, who battled with Trump for the Republican presidential nomination in 2016. Trump, too, is unhappy. The corporate tax cuts introduced by his administration in late 2017 were supposed to lead to increased investment, but companies instead upped their buyback spending.

“When we did a big tax cut and when they took the money and did buybacks, that’s not building a hangar, that’s not buying aircraft, that’s not doing the kind of things that I want them to do,” he complained last month. Critics argue buybacks are often used to manipulate share prices higher; by buying back shares, the number of shares outstanding is reduced, resulting in artificially high earnings per share (EPS).

Some research has found companies are more likely to announce a buyback if they are in danger of missing quarterly EPS estimates, evidence that some buybacks are symptomatic of managerial short-termism.

Research has also found that companies which rely heavily on issuing stock options to compensate management are “significantly more likely” to buy back stock than firms which rely less heavily on stock-option-based compensation. In other words, executives may be incentivised to buy back company shares rather than investing in their businesses and workers. Additionally, they can be a waste of shareholders’ money. Companies tend to buy back shares when times are good and valuations are rising only to exit the market when valuations are falling.

Defenders of the practice say there is little evidence to support charges of under-investment, arguing markets would punish companies guilty of using buybacks for short-term considerations. Buybacks are ultimately a way of returning money to shareholders, they say, which is preferable to excessive cash piles or wasting money on unsuitable acquisitions.

When money is returned to shareholders, it generally gets reinvested in other stocks, says AQR founder Cliff Asness, as opposed to being spent on “cocaine and partying”.

Famously puglisitic, Asness complains that Trump’s recent comments on buybacks were as “innumerate and illogical” as those uttered by other politicians, adding: “It is nice in this time of extreme crisis, we can come together and jointly spew bipartisan populist idiocy.” Advocates also argue that the politicians who rail against buybacks rarely complain about dividends, even though both practices are essentially different ways of returning money to shareholders.

Buybacks have increasingly taken the place of dividends in recent decades and there are good economic reasons for that, they say. Firstly, buybacks receive more favourable taxation treatment. Secondly, they offer companies more flexibility. Investors often punish companies that announce a dividend suspension, viewing it as evidence of underlying problems, but they don’t pay the same attention to companies that pause buybacks. An example is fast food giant McDonald’s, which recently suspended its buyback programme. The company “wanted to maintain maximum flexibility as we went into this crisis and be as nimble as we needed to”, said chief executive Chris Kempczinski, who added that it would not make any changes to its quarterly dividend payout, saying it was a “priority”.

However, such arguments may fall on deaf ears, given that banning or restricting buybacks has increasing appeal to voters on both sides of the political divide.

The buyback debate “has moved from being a purely economic question to an ethical question”, says Sanford Bernstein. “Government’s role in financial markets cannot just be packed back into the box once this is all over”, it says, and this may “turn the tide away from shareholders-first views of economies”. Buybacks may even become “socially unacceptable”, says Bernstein. Investors shouldn’t assume that the current mood will shift any time soon – buybacks are likely to be out of favour for “at least several years”.

1 Belgium helps Ireland to a Brexit boon
2 ‘My rent here is so low it’s a joke’
3 This charming man: how Paschal Donohoe won the Eurogroup presidency
4 Can Grafton Street stop the flood of closures?
5 ‘Sad day’ for House of Ireland as tourism retailer goes out of business
6 AIB to compensate another 1,100 tracker mortgage holders
7 New Powerscourt Springs hotel to open in defiance of virus gloom
8 Goodbody’s planned €155m sale to Bank of China falls through
9 Banks will be judged less on payment breaks and more on next step
10 What is Covid Tracker Ireland?
Real news has value SUBSCRIBE