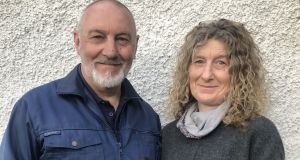 The Greenes produce a range of syrups, sweet and savoury jellies and fruit cheese from wild berries, flowers and herbs foraged and grown on their smallholding near Birr.

“Shrubs are history in a bottle. They are hand made in small batches using traditional preparation methods and were originally used as drinking vinegars and thirst quenchers,” explains Sharon Greene co-founder, with her husband Gordon, of Offaly-based Wild Irish Foragers.

The Greenes produce a range of syrups, sweet and savoury jellies and fruit cheese from wild berries, flowers and herbs foraged and grown on their smallholding near Birr. Shrubs are the latest addition to their line-up and they currently sell nine varieties including a wild blackberry shrub which history records as being good for gout and digestion and a rowanberry shrub which is known as the singer’s shrub as it was gargled as an anti-bacterial by singers in days gone by to keep their vocal cords healthy.

Shrubs first show up in English literature of the 15th century and are concentrated non-alcoholic syrups made with a combination fruit, herbs, vinegar and spices. They can be added to food and drinks, sipped with cheese or used for culinary related tasks such as deglazing cooking pans. The company’s range is aimed at chefs, mixologists, home cooks and consumers who like to try different tipples.

The Greenes first began looking for ways to supplement their farm income back in 2014 as their small holding was not generating enough to sustain a family of seven. “The idea of typical farming did not sit well with us so we started exploring other ways of living with the land,” says Sharon Greene. “We considered many options but none were feasible and then the idea for Wild Irish Foragers happened almost by accident.

“We were picking blackberries and my youngest daughter spotted a rosehip and asked me what it was. I realised I was wrong to have assumed that this part of country living was automatically being passed on. We picked some rosehips, I rooted out an old recipe and made a syrup and that kick started my interest in Irish food heritage. Many of the recipes were from a time when cooking was on an open fire so it took some time to adapt them to modern methods, to recreate the flavours and to train the palate to know when a shrub was ready for decanting.”

The Greenes run their business on their own for most of the year although their children pitch in when they’re home. With sales growing steadily they had hoped to take on seasonal labour this year but the Coronavirus has put paid to that. “If demand continues as it is now we hope to start providing local employment in 2021,” says Sharon Greene. “Our products are aimed at anyone interested in quality food produced in small batches. It is sustainable food married to the preservation of nature and from our farm we harvest rosehips, elderberries, damsons, elderflowers, gorse, rowanberries, sloes, spring nettles, blackberries and honeysuckle to name just a few.”

Like many small food businesses Wild Irish Foragers is a labour of love that has absorbed vast amounts of time. In cash terms the investment has been around €25,000 to cover product testing, packaging, launch costs and trade shows. “Costs were contained because we started small and only increased output as demand increased,” Sharon Greene says. “We inherited debt with the farm and decided at the outset that we would not take out any big loans. The way things have gone now, we’re very glad we took that approach. We have recently had interest in our products from markets in the EU, the US and the UAE so the intention is to gradually scale up. Raw ingredients are in ample supply as we only pick a third of what is naturally produced each year to increase regeneration. We are committed to staying manageable and not exploiting the land and strongly feel there is always a place for the small producer.”