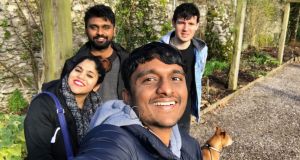 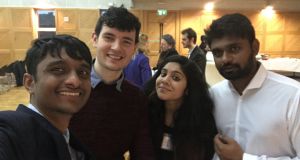 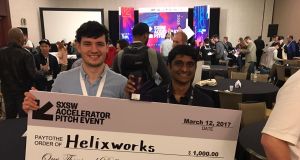 Cork-based company Helixworks Technologies won the “most innovative” award for its work to make a commercially viable system to store digital information in DNA.

Getting noticed at the massive tech fest South by Southwest is no easy task. A maelstrom of talks, pitches and stands, the conference sprawls across numerous locations in downtown Austin, Texas, where a mix of established giants and energetic young hopefuls vie for attention.

So when Cork-based company Helixworks Technologies got the chance to speak at the SXSW Accelerator Pitch Event, they made the most of it.

And it paid off – the company won the “most innovative” award for its work to make a commercially viable system to store digital information in DNA.

“Twitter was buzzing,” says Helixworks co-founder Nimesh Pinnamaneni of the reaction to the win.

Preserving digital information in DNA is not a new idea. The molecule that makes up our genomes has encoded information for billions of years, and advances in the technology to sequence (read) and – importantly – to write or synthesise DNA have opened up the prospect of converting digital data into a molecular code of DNA’s bases or “letters” that can be stored and then read when needed.

Recent years have also seen the surge of big data, and expected global data is estimated at 44 trillion gigabytes by 2020, according to Dr Aisling O’Driscoll, a lecturer at Cork Institute of Technology.

Can DNA absorb the digital demand? “DNA provides the first viable alternative to silicon,” says O’Driscoll, who has no connection to Helixworks but who is aware of their approach.

“[DNA] offers a cheaper, long-term alternative that wouldn’t consume much physical space, would require little energy to maintain and has greater longevity as it won’t degrade like traditional data storage solutions. All the world’s data could be stored in DNA weighing less than one kilogram.”

In 2013, O’Driscoll and CIT colleague Prof Roy Sleator co-wrote a paper in the journal Bioengineered where they pointed out that Moore’s law – the famous dictum by Intel co-founder Gordon Moore about the growth of computing power – is making way for “life’s law”.

At present though, DNA is not a “silver bullet”, notes O’Driscoll, and technical and commercial challenges remain. Key among them are the need to build a usable, reliable and affordable system for both writing and reading the encoded data.

“It won’t be widely utilised unless it’s cost effective – not just data storage but also retrieval,” she says. “It won’t be cost effective until it’s widely commercialised, which won’t occur until the technology is sufficiently mature, fit for purpose and there’s competition in the market.”

Developing synthetic DNA as a storage medium is an active field of research for heavy hitters such as Microsoft, IBM and Harvard, so where does Helixworks fit in? The small company is striving to make “writing” information into artificial DNA simple and more affordable. “We are showing how we can try to bring this to a commercial product,” says Pinnamaneni.

He and Helixworks co-founder Sachin Chalapati were inspired to explore DNA storage themselves when they were masters students in Sweden. They attended a talk by Craig Venter, a pioneer of human genomics and synthetic DNA, and they spoke to organisations that needed to store large volumes of data. The combination set the cogs in motion.

“If you could throw the information into DNA, it would take up less space,” says Pinnamaneni. “This was an engineering problem.”

They created a prototype that caught the eye of accelerator IndieBio EU (now RebelBio) in Cork, and they moved to Ireland. With backing from SOS Ventures and Enterprise Ireland’s New Frontiers programme, Helixworks has since been developing their technology, using a “Lego block” approach to assemble DNA in order to drive down costs.

The process has not gone without a hitch though. Last summer Helixworks offered a commercial product: 512 Kilobytes of data storage (enough for a poem or a small photo perhaps) in specially encoded DNA, packaged in a gold capsule.

The orders came in – including one from a biotechnologist who wanted to encode an anniversary message for his wife – but the fledgling company soon realised it would take too long to fill them.

“We learned a very important lesson,” says Pinnamaneni. “We were eager, but we didn’t understand the timeline it would take to deliver. When you are starting up things happen, and we learned this the hard way.”

Now the focus is on automating their platform, according to Pinnamaneni, and the company has taken the open-source approach, freely sharing technical details on its website. “We want to get people excited,” he says.

And while much remains to be proven about DNA storage, Pinnamaneni envisages that in years to come we could have a small DNA-based device in our homes to store the enormous amounts of data we generate.

“[It would have] one writing part, one reader and one part for storing,” he says. “And it would just be there, a bit like the wifi router is now, just sitting there doing its job.”