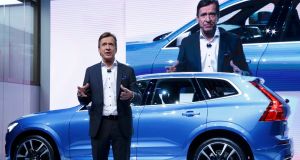 Vovlo CEO Hakan Samuelsson at the launch of the new Volvo XC60 at the Geneva motor show earlier this month: “When it comes to autonomous cars, people will think twice before they really sit back and relax and watch a movie.” Photograph: Denis Balibouse/Reuters

Volvo’s corporate persona is that of the sensible Swede, safety-conscious if a little staid.

In reality it’s a motoring minnow making some of the boldest investment decisions in the industry and with a business ethos that’s closer to a tech start-up than a metal-bashing car maker.

The challenges facing car firms today are enormous. Fledgling autonomous driving systems are already on the market. The traditional combustion engine looks likely to give way to battery power, or at least hybrid powertrains in the interim. Diesel’s days are numbered.

With the future landscape so uncertain, it seems foolhardy for the small Swedish brand to try to lead the revolution. Yet with Hakan Samuelsson at the wheel that’s exactly what’s happening.

In its list of “Global Game Changers”, Forbes last year included just two from the automotive sector. One was Elon Musk, the other the 66 year-old Swede, a former boss of truck firms Scania and MAN.

Under his guidance, Volvo’s financial situation is relatively healthy. Operating profit rose 67 per cent last year to 11 billion kronor (€1.16 billion), with an operating margin of 6.1 per cent. That was still behind the 10 per cent margin regularly posted by the German trio of Audi, BMW and Mercedes but ahead of the 4 per cent Volvo recorded in 2015.

Since its takeover by Chinese firm Geely after a fire sale by Ford in 2010, Volvo Cars has already taken major gambles some considered as folly.

The first fruit of this investment was the new XC90 SUV in 2014, which the Economist magazine warned “may prove to be an expensive folly on the part of Geely”. It has so far proved a massive hit.

Then there was the decision to only offer four-cylinder engines, even in a behemoth like the XC90. Commentators thought that would be the death knell for the new car, particularly in the critical US market, where four-cylinder engines are what Texans use to power lawnmowers.

Yet the XC90 went on to win the “Truck (SUV) of the Year” title in the US. The engine decision was also financially savvy, for it freed up valuable investment for R&D in other key areas. As Samuelsson explains: “I think we had eight different engines in the old Volvo, all requiring different cabling and harnesses and piping and that’s a lot of complexity.”

His latest gamble is the new XC60, the best-selling model in the Volvo range. Unveiled at this month’s Geneva Motor Show, it’s the firm’s most important car to date. Then again, every new model is these days.

But these are as nothing compared to the challenges ahead. Volvo is betting on self-driving electric cars being the must-have feature for premium buyers in the next decade. And while a wrong turn at any of its big German rivals would prove very serious, for the Swedish brand it could be fatal.

Volvo will be offering the self-driving system as an option in its cars by 2021. As to the additional price for such autonomous systems on new cars, he will not commit. “I think it has a very high value, especially if you can use the car for a sort of office and do video conferencing and business meetings. I mean that would make the car very valuable as a company car; that would be the favourite company car, of course, for fleets.”

Recently VW Group executives suggested the new systems could double the cost of a car. “No, maybe if you have a very cheap car that could be the formula, but for a premium car it will be less than that. To really have it competitive it has to be a higher price but not double the overall price. But let’s see. And the cost, for sure has to be lowered, but the price will be more related to the value.

“We will come out with a car after 2020 that will have this as an option so it will be a premium car, but it will have autopilot on the options list and it will not be 100 per cent take-up, but maybe a quarter of the cars. Once you have tried it I think you will never want to buy a car without it.”

Unlike the current ‘pilot assistance’ systems – which require drivers to be ready to take over at any time – he says the new systems by then will allow for totally unsupervised autonomous driving. “It has to be unsupervised and you have to be able to do something else totally safely. You can drive it if you switch off autopilot and you drive it manually and I think that is what people also want to have from a premium car.”

If the driver wishes to veer off these routes, on to unmapped routes for example, then that is when the system can be disengaged. The next level up, full automation, is likely to be initially reserved for taxis and public transport systems.

“Taxi firms want to move people simply from A to B, but a premium customer wants more of a normal car but with the advanced cruise control,” says Samuelsson.

The new self-driving option will need to fit with Volvo’s ambitious safety promise – by 2020, no one will be killed or seriously injured in a new Volvo car or SUV. Can they really make such a commitment when you will have autonomous cars sharing the roads with flawed humans? “I think we just have to accept that there will be a mixed traffic situation, it’s impossible to have special roads for autonomous cars. So that’s one of the challenges: how will that work out?

“How will human drivers react when they see an autonomous car coming? We have been discussing this a lot. We don’t want to put stickers on the autonomous cars, because that could trigger some provocations. People may be tempted to test whether they can break the autonomous system or not.”

To Samuelsson the division of control between driver and car needs to be clear. “Either it’s a very normal car and you drive it, you’re responsible, or you are driven by the car and liability will have to be on the car producer. We have to take that. But you really have to know, and you can never have an autonomous car that relies on the fact the driver is there as a sort of back-up. I think that is too dangerous.”

“I think it’s correct you have to do that, because if you are not ready to take responsibility for the technology then you shouldn’t be in this game.”

While the hardware for self-driving technology is largely outsourced, it’s the software that Samuelsson sees as the critical area where Volvo adds value. “We do buy in the sensors and the radars, but the decision-making software, that’s in-house, that’s our core competence. How should the car react? How should it steer? Should it brake? That’s our core competence. The rest we rely on partners.”

That in turn links to what he sees as Volvo’s future sales pitch to customers in the age of autonomous driving. “Being first out on the market is a differentiator and then, really, safety and credibility will be important,” he says.

“When it comes to autonomous cars, people will think twice before they really sit back and relax and watch a movie. You can just imagine if you are driven by somebody you don’t know very well, you tend to brake when you are on the other side of the car. So I think such a system has to be very reliable and credible and that’s probably one of the best assets we have as a company. We have a strong reputation for safety.”

As to any moral dilemma facing autonomous cars, he says that when the car finds something is in its way, it will always do everything to brake and if there is an empty space in any direction it will steer towards it. If not, then the focus will be on doing its best to brake and stop before a collision, but it will never make any moral decision.

On the future of diesel, Samuelsson is stoic. “What is happening is that European legislation allowed NOx to stay at a rather high level.”

Those days are gone now, partly as a result of the emissions scandal at Volkswagen, though he doesn’t reference it directly. With much tougher emissions standards coming into effect in three years, he reckons the only option is electrification. Volvo’s first all-electric car will go on sale in 2019.

“We should be very firm that we believe in electrification. And that’s not just saying we’re looking into it, or that we’re building some concept cars or testing. We see the future is electrified and we want to be fast into that transition. That’s why we have the commitment: one million electric Volvo cars on the road by 2025.”

It’s yet another ambitious target, but with the safety promise and self-driving goals it fits with the new approach by the Swedish brand under Samuelsson. A successful IPO could crown him as one of the few motor industry bosses to turn the current tech disruption to his advantage.

Volvo may make much of vehicle safety, but its ambitious business strategy is anything but staid.