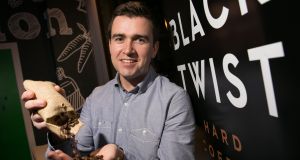 For those who enjoy good coffee and good whiskey, a new drink from Bayview Beverages could hit the spot. It’s called Black Twist and it is a 25 per cent ABV (alcohol by volume) craft spirit drink that blends single origin Kenyan Arabica coffee and Irish whiskey.

Black Twist has been created by Conor Coughlan who has brought his background in chemistry and food science to bear on his love of artisan coffee and an interest in brewing techniques. Black Twist, which has been two years in the making, is the result.

The product, which is allowed to mature for seven days before the coffee is filtered out, has just been unveiled to the Irish on-trade sector. It comes in a 700ml bottle and is being pitched as a premium product. This will be reflected in the price, which is not yet finalised. Black Twist will be produced in Ireland under contract.

Coughlan joined the Kerry Group from college as a new product development graduate and stayed there from 2008 until 2015 when he began working on the idea for Black Twist. Coughlan describes his innovation as “hard coffee” as in coffee brewed in hard liquor to produce a less sweet and more authentic taste. “Recent trends in both coffee and spirit consumption are moving away from sweet products to real flavours driven primarily by millennial consumers,” he says. “This in turn has been driving the growth of premium craft products in both the coffee and whiskey sectors globally.

“The popularity of the espresso martini cocktail, coffee stouts and the continued blurring of lines between bars and coffee shops suggest the millennial consumer is more than comfortable combining coffee and alcohol,” Coughlan adds.

“Despite this, the only products on the market both together are coffee liqueurs – highly sweetened products that are not reflective of the way consumers enjoy their coffee or spirits today.”

Coughlan says he was very interested in how the cold brewing process was becoming increasingly popular in the coffee sector internationally. “This is where coffee is slowly brewed in water at room temperature, often for 24 hours or more. It involves a completely different set of chemical reactions to hot brewing and gives a different drink with a more nuanced flavour.

“Cold-brew coffee is typically enjoyed neat over ice and I thought it would be really interesting to explore the effect of cold brewing top quality coffee in Irish whiskey instead of water. I contacted the guys in Khanya Craft Coffee and Teagasc, Moorepark, to get the ball rolling and after many, many trials with different coffees, recipes and brewing conditions, Black Twist was born.”

To date roughly €130,000 has been invested to bring the product to market and this has been a combination of personal funding and support from Waterford LEO and Enterprise Ireland. Coughlan is a graduate of the New Frontiers programme for start-ups and recently participated in Bord Bia’s Foodworks initiative for new product development.

“Our initial focus is on building awareness in the Irish on-trade and this will involve working with a distributor to get in front of bars and restaurants,” Coughlan says.

“The ultimate proof is in the tasting which is why we want to get as many people tasting Black Twist as quickly as we can.”

Once the rollout is under way in Ireland Coughlan has his sights set on breaking into the UK and US markets. He plans to finance this through a fundraising round of €300,000.

Coughlan says the product can be used by bars as a cocktail ingredient and also by gastro pubs and other licensed premises to create drinks such as the Iced Latte Twist, which combines Black Twist, cold milk and a dash of condensed milk or syrup. “I definitely view Black Twist as a disruptive product and the main target are millennials who are social, adventurous and regard food and drink as a hobby.”