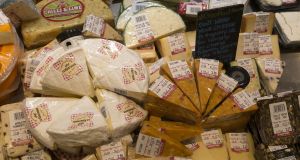 Brexit poses a serious threat to our cheddar cheese exports, given the dominance of the UK market. Photograph: Dave Meehan

Brexit day finally arrived and while there is a multitude of sectors affected, there is a specific concern for the Irish food sector.

In a “no deal” scenario, World Trade Organisation (WTO) tariffs could apply on trade with the UK. That would mean that beef could face an average tariff of 74 per cent; dairy products in excess of 50 per cent; and processed consumer foods close to 20 per cent. While hopefully this extreme scenario will not materialise, it does help to concentrate the mind.

Ireland supplies 41 per cent of food and drink exports to the UK, valued at €4.4 billion. This comprises: 70 per cent of prepared consumer foods exports; 56 per cent of meat exports; 30 per cent of dairy exports (including 60 per cent of cheese exports); and 32 per cent of alcohol exports. With the level of tariffs that could apply under the WTO, the impact on trade, competitiveness, company profits and farm incomes would be catastrophic.

The UK import tariffs on Irish goods would not be the only source of competitiveness pressure. It’s very likely that the UK’s penchant for “cheap food” would result in a flood of imports from non-EU countries.

Food standards could also be relaxed in the UK relative to the EU. Likewise, Brexit could raise the cost of goods imported from the UK into Ireland for further production. In addition, costly customs requirements could adversely affect Irish trade with the UK and also exports to continental Europe that transit through the UK “landbridge”. An additional point that’s not been sufficiently emphasised is that the UK has been the entry market for most Irish companies that have sought to develop export markets.

How can Irish processing companies and farmers prepare for Brexit? Companies have more options to offset the competitiveness shock of Brexit than farmers. Options such as locating processing operations in the UK or expanding existing operations there will be pursued. In addition, new markets will be forged and existing markets expanded in non-EU countries, especially in the rapidly growing food markets of Asia.

There is of course no guarantee that Irish farmers will automatically benefit from such strategies. But Irish farmers and Irish processors can achieve offsetting competitiveness gains though innovation. The level of innovation generally in Irish food processing is far too low. The prospect of a “hard” Brexit provides an unprecedented opportunity for a “step change” in this area that must be grasped.

There are significant opportunities to harness Ireland’s capability in ICT, for instance, to enhance the competitiveness of our primary and processing sectors. Benefits include new approaches to lean manufacture, traceability and provenance.

The latter underpin a global trend of “country of origin labelling” for beef and dairy products that will help to secure new export opportunities, particularly in markets like China, where food safety and quality have become one of the most important attributes for the consumer.

Irish companies can be encouraged to aggressively leverage Ireland’s pasture-based agri-production system. Teagasc has ongoing research in this area to substantiate the positive claims of pasture-based agriculture from a nutritional and climate-change perspective. This research supports Bord Bia’s Origin Green initiative and helps to build Ireland’s reputation as a unique food island whose products have verifiable traceability, quality and nutritional attributes.

Brexit poses a serious threat to our cheddar cheese exports, given the dominance of the UK market. Teagasc is currently drawing on experience from its cheese diversification programme which has generated new cheese varieties/variants and more efficient manufacturing processes based on a cheddar manufacturing platform.

Understanding the cheeses that Chinese consumers prefer, for instance, through cross-cultural sensory research could be a key route to a whole new market. But Irish dairy companies will also need to diversify their cheese processing platforms. A welcome initiative in this respect is the recently announced partnership, between Dairygold and TINE (Norway’s largest co-op), to construct a new facility to produce Jarlsberg cheese on the site of Dairygold’s existing speciality cheese factor at Mogeely, Co Cork.

Other research areas include foods that address lifestyle nutrition and other specific market segments, eg infants, teens, athletes and the elderly. Innovation is also under way in the area of separation technology for the generation of different milk fractions that are enriched by selected nutrients for new product applications. These new ingredients can potentially form the nutritional base for foodstuffs in new markets.

An extension of this approach is the design of “smart” powdered ingredients for the export market. These powders possess specific functionality that allows an intermediate processor abroad to produce consumer products suited to local markets. An example of this type of innovation is the recent investment by Ornua in the production of a local cheese for the Saudi market utilising Teagasc technology.

Time is a big factor in agricultural decision-making. Cattle can take over two years to be reared to slaughter. Consequently, production decisions made by Irish farmers this spring will be realised close to the Brexit date.

Agri-food produce is also highly perishable, meaning that farms and food processing firms have little capacity to use inventories to smooth the adjustment to demand shocks. For these reasons, it is critical the agri-food industry is provided with clarity and soon concerning the disruption to trade between the UK and the EU, post-Brexit.

But the medium-term imperative is that our food sector must embrace innovation as never before.