Buymie gets your groceries to you when you need them 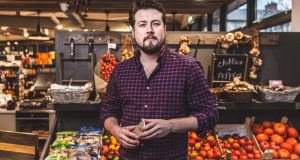 Devan Hughes of Buymie: “We’ve actually had to take steps to slow our growth just to keep up with demand”

Devan Hughes, cofounder of new on-demand grocery delivery service Buymie, knows that shopping for groceries can be a time-consuming chore.

“Consumers spend on average 5½ days a year grocery shopping. This is over two hours a week and ultimately means you’ll spend roughly one full year of your life in a grocery store,” he says.

“Buymie gives customers this time back, removes the friction and hassle of shopping, and your groceries are picked and delivered to your door within a time window that suits you.”

Online grocery delivery services are not new. In fact, they’ve been around for more than a decade. However, the uptake has been surprisingly small. “Globally the market penetration for the service is only around 1 per cent and the reason is twofold,” says Hughes who co-founded Buymie with Artavazd Sokhikyan in February 2016.

“It is a prohibitively expensive exercise for small and medium-sized businesses, so they have been completely locked out of the market. This means the only ones that can afford it are the large multiples. Secondly, because their traditional business model is linear, they haven’t been able to move past next-day delivery in most cases. Even then, they’re experiencing significant losses on this aspect of their business,” Hughes says.

Where Buymie differs to traditional delivery services is in its rapid turnaround and the fact that you know when your delivery is coming. For a premium fee of €6.99, a customer can have groceries within an hour. This drops to €4.99 for two hours and to €3.99 for three hours. On top of the delivery charge, shoppers pay a commission of 14.75 per cent on the value of their basket.

“Initially we thought the one-hour turnaround would be the Holy Grail, but in fact most customers are choosing the three-hour option. We see a lot of orders coming in during the afternoon so people can have their groceries delivered around the time they are getting in from work,” Hughes says

“And they know the ‘when’ as they get updates from their personal shopper. They don’t have to hang around waiting. Another emerging pattern is mums shopping around 7am for baby items.”

Buymie is a mobile-first platform. This means it’s designed for use with smartphones and tablets rather than logging on to the web. The app is free to download and is available for Apple and Android devices. Customers create an account and pay for their groceries with a debit or credit card. PayPal is coming eventually.

Buymie has about 50 stores on its books in the greater Dublin area and has built up a database of their prices. These prices are live with stores that are Buymie partners (about 20 per cent) and have been mapped manually with the others. Hughes says there is a margin of error of about 6 per cent on non-live prices and adjustments are made automatically by the payments system.

The personal shoppers are given a debit card preloaded with the value of the order, so nobody is carrying cash around. If an item is not available, the shoppers make contact with their customer to discuss an acceptable substitute. As of now the company is focused on grocery outlets but its service will be rolled out to other types of stores.

“In a nutshell we have built a decentralised platform that sits across the entire market and by being ‘retailer agnostic’ and creating a shared infrastructure, we’ve been able to democratise access to online and on-demand delivery for retailers of any size without the need for any heavy upfront capital investment. We take care of the technology and use data science to match supply and demand in real time,” says Hughes, whose background is in finance and data-driven CRM systems. Sokhikyan has a 15-year track record in software development.

The average size of a Buymie basket is 19 items and while Hughes won’t comment on the typical value, he says it is twice as high as the average in-store shop.

“With our partner stores we get access to live pricing, including special offers, and they get access to a digital store environment and to anonymised data about what people are buying and when, which helps them plan availability and more efficient ordering,” he says.

Partner stores pay Buymie a monthly subscription to be part of its platform.

The personal shoppers, of which there will be about 40 by the year end, are paid a retainer and flag their availability a week in advance.

“Because we understand where our orders are coming from and where the peaks and troughs are within the different post codes, we can match shopper supply and demand pretty accurately,” Hughes says.

The biggest requirement for Buymie to flourish is population density. The model needs a cohort of about 200,000 people, which limits its expansion in Ireland. Hardly surprising, then, that the company already has its sights set on other markets.

“We’re cloud-based so technically we can go into any market at any time, but our next step will be into the UK,” Hughes says.

The Buymie platform has taken just under two years to develop, and investment to date has been about €250,000. This came from an angel investor along with a contribution of €50,000 from the Enterprise Ireland’s High Potential Start-Up (HPSU) fund.

“Our organic growth has been so strong in the last 12 months that we’ve had to spend virtually nothing on advertising. In fact, we’ve actually had to take steps to slow our growth just to keep up with demand,” Hughes says.

“Our primary objective over the past year was to collect market data. We’re now moving into a new phase and in the process of raising a large round of funding. A hard launch for Dublin city is scheduled to take place this summer.

“The Buymie platform is being perceived as a very disruptive force right now, mainly because we are growing so fast and creating a brand new distribution channel. In five years’ time, though, I believe it’ll be as commonplace as the toaster in your kitchen.

It helps that the cost of communication has plummeted with unlimited data plans and everyone carrying around “super computers” in their pockets.

“Demand for online groceries is set to double in the UK over the next five years and Ireland’s online grocery market surged 45 per cent in the last 12 months alone to €177 million. We’re entering a market predominantly owned by large corporations and although we’ve only been around a short time, we’ve already had a concerted effort to try and close us down,” Hughes says.

“Going up against big players is a challenge, but we see their behaviour as a strong indicator that what we’re doing has the potential to drive real innovation into a market that has, for a long time, been lagging behind.”