The pharma company upgrades guidance after strong first half 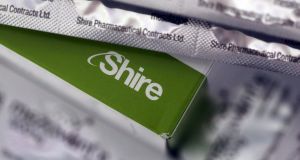 Shire said on Thursday that it was exploring options for its hyperactive drugs business. Photograph: Chris Ratcliffe/Bloomberg

Irish headquartered pharmaceutical company Shire said it was exploring options for its hyperactive drugs business, including a possible stock market listing, as the pharmaceutical group upgraded its full-year earnings forecast on Thursday.

Shire, which reported 7 per cent growth in second-quarter product sales, said it expected to complete a strategic review of its Neuroscience franchise by the end of the year.

Chief executive Flemming Ornskov said an “exciting inflection point” had been reached where both Shire’s ADHD drugs, such as the blockbuster Vyvanse, and its rare disease medicines were performing well and had strong growth potential.

“The critical strategic decision before us is to determine how best to manage and operate these two businesses in a way that ensures that each business has the appropriate level of management focus, investment and strategic flexibility,” he said.

Last year the company announced a $400 million (€367 million) investment in the Republic with the construction of a new biologics manufacturing campus at Piercetown, Co Meath. It announced some 400 new jobs as part of that plan, which received formal planning permission last December.

Shire Pharmaceuticals Ireland is involved in the research, development and marketing of prescription medicines. The company’s newest ADHD drug, Mydayis, received US approval in June and will be launched in September.

“This approval, and its pending launch, further underscores our success in creating a sustainable franchise and our continued commitment to innovation in ADHD,” Ornskov said.

The company also said its acquisition of haemophilia specialist Baxalta last year had strengthened its leadership position in rare diseases.

Analysts at Jefferies said a spin-off of the ADHD business had been mooted many times, but it now seemed reasonable given Baxalta had catapulted the transition into rare diseases, and Mydayis would extend the ADHD portfolio’s lifecycle beyond Vyvanse’s 2023-24E expiries.

Shire, which is based in Ireland but generates most of its revenue from the United States, reported second-quarter revenue of $3.75 billion and non GAAP earnings per ADS of $3.73, up 11 per cent and beating a market forecast of $3.60.

It upgraded the midpoint of its full-year EPS forecast by 10 cents to $15, reflecting its performance in the first half and stronger-than-expected costs savings from the Baxalta deal.

Product sales, including the contribution of the Baxalta drugs, rose 55 per cent to $3.59 billion in the second quarter, it said.