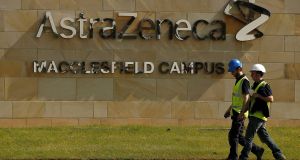 Workers at AstraZeneca’s Macclesfield site in England. Shares in the British drug giant suffered their largest ever fall as it announced a big setback, with a much-awaited trial of a new lung cancer drug failing to show the benefits for which the company had hoped. Photograph: Phil Noble/Reuters

Shares in AstraZeneca were on track to suffer their worst ever fall after the Anglo-Swedish pharmaceutical company suffered a big setback with a much-awaited trial of a new lung cancer drug failing to show the benefits for which the company had hoped.

The study, known as Mystic, focused on an immunotherapy drug that AstraZeneca hopes will eventually be adopted as a first line treatment in preference to chemotherapy for a type of lung cancer.

However, results released today show that it did not reach its “endpoints” for progression free survival – the length for which people go without their cancer worsening.

Shares in AstraZeneca closed 15.4 per cent lower at £43.25 in London trading. That marked its worst fall since its predecessor Zeneca listed in 1993.

In a recent interview with the Financial Times, chief executive Pascal Soriot suggested the company might be “lucky” and see strong results at this stage.

However, he had said it was likely AstraZeneca would have to wait until next year, when data for long-term survival will emerge, to reach a definitive judgment on the medicine.

Following Thursday’s news, Mr Soriot said that, despite the outcome of the initial readout, “we must be patient as the Mystic trial continues as planned to evaluate overall survival”.

He said the company was “delighted” with the strong results from another trial, for another lung cancer drug, Tagrisso, “which goes from strength to strength”.

The company was also excited about a strategic collaboration with Merck, announced today, that he said would maximise the potential of another cancer drug, Lynparza, “as a backbone of many combinations”.

“This is obviously very bad news,” with the only hope now pegged to the overall survival results that are pending, said Rudi Van den Eynde, an AstraZeneca shareholder who manages the pharmaceutical and biotech strategies at Candriam Investors Group in Belgium. “They are now more vulnerable, but the bride is a bit less desirable also.’’

The Mystic study was a crucial test for AstraZeneca’s two immuno-therapies – a new class of drugs that activate the body’s defence system to attack tumours – in its race with rivals including Merck, Roche and Bristol-Myers Squibb. to dominate the market for cancer treatments.

Deadly lung tumours have become a key battleground for drugmakers in the closely contested race to develop life-saving cancer therapies.

The news coincided with the company’s second-quarter results which showed an 11 per cent fall in total revenue and sales in the first half of the year, in line with market expectations, as the company continued to cope with the loss of patent protection on some key drugs.

When he fended off a takeover bid from Pfizer three years ago, Mr Soriot put at the heart of his defence his ability to revitalise the company’s research and development pipeline.

Imfinzi, the drug in the Mystic trial, represents one of its best hopes for replacing revenue lost from patent expiries on one-time blockbuster drugs, with estimated peak annual sales of at least $2.5 billion.

However, ahead of the results, some analysts had made clear that they no longer felt the outcome of the Mystic trial was pivotal. This is due to strong results from another drug based on the same compound which showed very strong results.

Phase 3 trials showed that Imfinzi, the brand name for durvalumab, significantly reduced the risk of the disease worsening or death among patients with stage 3 non-small cell lung cancer who had not progressed after standard treatments.

The disappointing results extend a tumultuous few weeks for AstraZeneca as speculation about Soriot’s future mounted following a media report that he’d accepted the top position at Teva Pharmaceutical.

In a July 16th staff memo, the CEO urged employees to remain focused on the UK drugmaker’s goals and ignore rumours, though he refrained from directly addressing the Israeli publication’s article on his plans.

Both companies have also officially declined to comment on the veracity of the report.