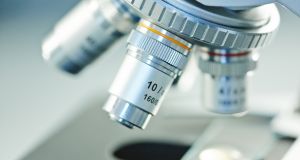 Clinical laboratory sales at Trinity Biotech dropped by $0.4 million to $21.5 million in the second quarter of 2017. Photograph: iStock

Pre-tax profits at Dublin based pharmaceutical firm Trinity Biotech dropped by 48 per cent in the first six months of 2017 to $1.1 million (€0.95 million) due to the combined impact of lower revenues and gross margins.

Revenues for the second quarter of this year also dropped by 3.2 per cent to 25.4 million with point-of-care revenues leading the decline.

Announcing results for the second quarter of 2017 the diagnostic products manufacturer said that the drop in point-of-care revenues was primarily attributable to lower sales of HIV products in Africa. The company explained that these sales tend to fluctuate significantly “and this quarter’s decrease is well within the normal range for such fluctuation”.

Gross margin for the quarter also dropped compared to the corresponding period in 2016. The decline of 2.5 per cent to 42.5 per cent was “due to lower distributor pricing due to the strength of the US dollar against a range of currencies and less favourable sales mix”.

Since the share buyback programme began the company has purchased approximately 1.9 million shares with a total value of $14.6 million.

Ronan O’Caoimh, the company’s chief executive, said: “This quarter’s revenues were down 3 per cent when compared to Q2, 2016. The remainder of our business remains strong and demonstrated underlying revenue growth this quarter.”

Referring to the share buy back programme, Mr O’Caoimh said the company intends to be “active purchasers in the market” at current share price levels.