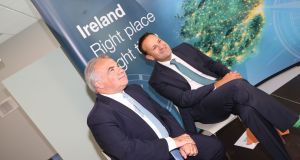 Contact lens giant Bausch & Lomb has opened an €85 million extension at its Waterford manufacturing base creating an extra 125 jobs.

Three years after the company was on the verge of closing its base and shedding 1,100 employees, Taoiseach Leo Varadkar and Tánaiste Frances Fitzgerald officially opened the new facility amid growing demand for disposable contact lenses.

Mr Varadkar said the investment was a “big vote of confidence in this Government’s ambitions for Waterford and for the future”.

“Bausch & Lomb and its parent company Valeant are to be commended for their commitment to the southeast region. This Government is determined to show over the next few months and years that we can not only continue to stimulate growth, but that we are able to spread the benefit across the entire country.”

Ms Fitzgerald said it was a “terrific boost” for the southeast to have “a project of this magnitude in a high-tech and high-skilled sector”.

In 2014 Bausch & Lomb in Waterford was in trouble when the then new owners Valeant, a Canadian multinational, said there would have to be 200 job losses and up to 20 per cent cuts in pay for the remaining 1,000 or so staff. Bausch & Lomb now employs around 1,300 people at its facility.

Agreement was eventually reached with the unions on slightly lower pay cuts, and the company agreed to invest in new facilities and an extension to the plant.

The investment, supported by the Department of Enterprise through IDA Ireland, has created 125 additional jobs, bringing the total to 300 new jobs in the past three years.

Valeant said it has invested more than €200 million in the Waterford operations, infrastructure and manufacturing line growth.

Joseph Papa, chairman and chief executive of Valeant Pharmaceuticals International, said the enhancements to the site would enable the company to meet increasing global demand for the Bausch & Lomb contact lens brand. – PA