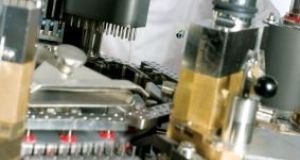 The Ireland Strategic Investment Fund is a 15 per cent shareholder in Malin, having invested €50 million in the group’s IPO.

Melinta Therapeutics, a company backed by Dublin-listed life sciences investment group Malin, is to gain a public listing on Nasdaq after agreeing a merger with Cempra in an all-stock deal.

Malin, an Irish-headquartered firm established by a number of former Elan executives, invested $35 million in Melinta with a promise of a further $10 million in June 2015 as part of a Series 4 funding round of up to $67 million.

The deal, which was Malin’s first post-IPO asset, is the group’s second-largest investment by capital committed.

Shareholders in Melinta will own about 52 per cent of the new combined company.

Cempra is a North Carolina drug developer whose shares have been in free-fall since December after the FDA rejected its antibiotic treatment for pneumonia.

The company, which posted a $118 million loss last year, announced plans earlier this year to cut its workforce by 67 per cent. Cempra on Wednesday reported a $12.3 million second-quarter loss.

The merger has been approved by the board of directors of both firms and is expected to close in the fourth quarter of 2017, subject to shareholder approval.

“Our shareholding in Melinta, Malin’s second-largest investment by capital committed, will become a publicly traded security which demonstrates the uniqueness of the Malin model in unlocking value for shareholders,” said Malin vice-president Seán Murphy.

Malin raised €330 million in one of the largest life science IPOs ever to take place in Europe, in March 2015. Former Elan chief executive Kelly Martin and chairman Bob Ingram, who sold the Irish stock market stalwart to Perrigo for $8.6 billion in 2013, are among those on the Malin board.

The Ireland Strategic Investment Fund, a government fund aimed at supporting economic activity and employment in Ireland, is a 15 per cent shareholder in Malin, having invested €50 million in the group’s IPO.