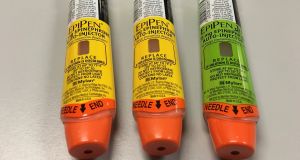 Mylan on Wednesday cut its forecasts for this year and next as eroding prices for generic drugs and challenges getting new products approved in the US hurt the drugmaker’s profitability.

Mylan said it was deferring all major US product launches from its 2017 forecast to next year, citing an “uncertain US regulatory environment”.

Alongside the update, Mylan, which also has come under fire for raising prices for its EpiPen allergy treatment, reported lower-than-expected earnings and revenue for the second quarter ended June 30th.

Mylan’s quarterly net earnings rose 76.4 per cent to $297 million(€253m), or 55 US cent per share, helped by demand for products it gained through the acquisition of Swedish drugmaker Meda last year. Excluding one-time items, the company earned $1.10 per share, missing analysts’ average estimate by six US cent.

Meda and another recent buy, Renaissance Acquisition Holdings, contributed about $633 million (€538m) in net sales during the quarter.

Mylan may also be a suitor for some assets that Teva may sell to reduce its debt. The Israeli generics giant is working to pare about $35 billion in debt, in part to preserve its credit rating, after an ill-timed acquisition of Allergan’s generics division. Plans to divest Medis, an Icelandic unit that develops generics for other companies, and its respiratory products would follow other pending disposals, including its women’s health business and European oncology and pain treatments.

The cancer and pain treatments have drawn interest from Mylan as well as rivals Fresenius and Novartis, people familiar with the matter have said. – Reuters /Bloomberg