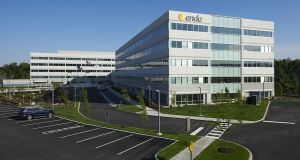 Endo’s total revenue fell 4.9% to $875.7m, hurt by weakness in its US generics business

However, total revenue fell 4.9 per cent to $875.7 million, hurt by weakness in Endo’s US generics business, but came in ahead of analysts’ average estimate of $836.4 million.

The drugmaker paid impairment charges of $725 million in the quarter, partly related to the withdrawal of its opioid painkiller Opana ER and the shutdown of its Alabama manufacturing facility.

Endo’s results come a week after the world’s number one generics drugmaker Teva Pharmaceutical Industries posted a steeper-than-expected drop in its second-quarter earnings, hurt by accelerated price erosion in the US. – Reuters

1 HSBC board rethinks overhaul and seeks even deeper cuts
2 ‘Over 1,000’ pubs have interest in Covid-19 insurance test case
3 Fruit and vegetable firm obtains interim court orders against technical manager
4 Pilita Clark: A lot of us are losing it in lockdown – but we really shouldn’t
5 Will remote working mean an end for the corporate HQ?
6 A Smigin of language goes a long way for well-travelled Cork woman
7 EU parliament may block fund unless it has grants which do not need to be repaid
8 Pricewatch: Coronavirus has given us four categories of shopper
9 EU divisions laid bare by ‘frugal four’ Covid recovery proposal
10 Help, I’ve no PRSI stamps – can I still get a pension?
Real news has value SUBSCRIBE