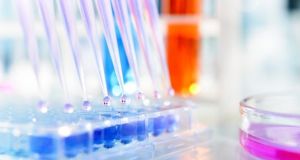 Belfast-based Fusion Antibodies said its performance in the second half of the year ended March 31st improved as orders and revenues significantly increased.

The company, which is a contract research organisation specialising in antibody engineering services, said its business picked up from October 2018, following a disappointing six months.

“This improvement in the second six months has been achieved by a mix of factors including addressing the external competitive pressures seen towards the end of H2 FY 2018 and in H1 FY 2019 and expanding and improving the quality of the company’s business development and marketing function,” Fusion Antibodies said in a statement.

During the year, Fusion Antibodies said it completed its facilities capacity expansion in autumn, six months ahead of plan and under budget.

The company’s Mammalian Antibody Library project is also progressing well and is expected to be introduced as a service next year.

Despite disappointing results in the first half of the financial year, the directors said they were confident recent order levels could be maintained into the new financial year and would be bolstered by the new facilities.

Fusion Antibodies has predicted that “significant revenue growth” would be achievable in the current financial year.