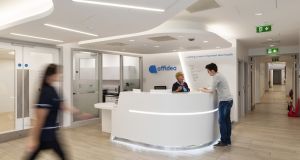 An Affidea clinic. The European Affidea group has 246 diagnostic imaging, outpatient and cancer-care centres in 16 countries

Europe’s largest medical services provider has invested €1.5 million in a north Dublin ExpressCare clinic that will be covered by insurance providers including Laya Healthcare and Irish Life Health.

Affidea’s new facility at Northwood in Santry will open to the public in the coming week to treat minor injuries and illnesses that don’t require a hospital visit.

Such injuries include fractures and sprains, lacerations requiring stitches, sports and DIY injuries, minor burns and scalds, eye and ear injuries and infections or rashes.

Affidea’s investment brings to three the number of ExpressCare clinics in the Republic alongside its Tallaght clinic and its facility at the Elysian in Cork.

“Our ExpressCare clinics are designed to benefit the Irish healthcare sector by relieving the burden placed on Irish hospitals by large numbers presenting unnecessarily in hospital A&E departments across the country,” said Barry Downes, chief executive of Affidea Ireland.

Having entered the Irish market in 2007, Affidea serviced 200,000 people in the Republic last year. The company is part of the European Affidea group which has 246 diagnostic imaging, outpatient and cancer-care centres in 16 countries.

The opening will be a boost for Irish Life Health and Laya Healthcare members in north Dublin given VHI’s decision in 2017 to restrict its SwiftCare clinics to its own members. While VHI members can access Affidea’s clinics, they cannot avail of direct settlement like Laya and Irish Life members. Instead VHI customers can pay and claim back through their insurer.

The company’s expansion in the area – at a facility where it already offered diagnostic services – will create 10 new positions for doctors, nurses and healthcare assistants.

All patients over the age of one will be treated at the Northwood facility, which will open from 10am to 10pm, 365 days a year.

1 Stripe lures Dhivya Suryadevara from General Motors to be CFO
2 Moving in and out of lockdown is a recipe for economic disaster
3 Shed Distillery in Leitrim to open €3m visitor centre next month
4 Glanbia sees sharp decline in earnings due to Covid-19 crisis
5 ‘No demand... because there are no people’ at well-known Dublin pub
6 IMRO speeds up royalty payments to Covid-hit musicians
7 Don’t buy online DNA ancestry tests. You are the real product
8 Urban micro-farm growing vegetables in heart of community
9 US ‘hard seltzer’ drink White Claw launches in Ireland
10 Microsoft worked with Chinese military university on AI
Real news has value SUBSCRIBE