Ireland compares poorly with Europe for access to medicines - report 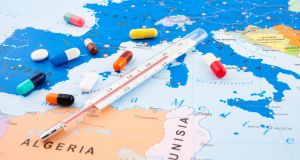 Ireland is, with France, the slowest of the wealthy western European states to approve payment for new medicines, according to a new survey by the industry.

Ireland is, with France, the slowest of the wealthy western European states to approve payment for new medicines, according to a new survey by the industry.

Patients wait an average of 486 days for access to new drugs in Ireland after the have been approved by the European Medicines Agency, says the European Federation of Pharmaceutical Industries and Associations, which represents the interests of the research-based big pharma groups.

That compares with an average of 413 days across 26 of the 27 markets examined and as little as 119 days in Germany, which is the best performer, according to the survey. Patients in France fare slightly worse than those in Ireland, experiencing an average wait time of 496 days.

The Irish figure has worsened dramatically over the last year when the patient wait time was 408 days, according to this study.

“Ireland actually has income per capita comparable with, or even higher than, countries like Germany, Belgium, Denmark and Spain, yet we lag these and many other countries in access to medicines,” he said.

The study examined the approval process up to the end of 2018 for 121 products sanctioned by the European Medicines Agency between 2015 and 2017. It did not state how it had chosen the 121 products – a fraction of the agency’s approvals over the period.

The countries examined are a a mixture of EU states (21 out of the 28), two of the three other members of the European Economic Area and Switzerland, Turkey, Serbia and Macedonia.

Ipha, a member of the federation, said that patients in Denmark, with a broadly similar population size to Ireland took just 146 days to access medicines after European approval, a figure that has improved in the past year.

However, the study authors note that the Danish figure is artificially improved by the exclusion from the data of some hospital products. On the flip side, special arrangements in France to grant patients temporary access to drugs ahead of formal market approval means its figure is skewed on the upside.

The study, which has been published to coincide with World Health Day, says that just 42 per cent of the 121 drugs licensed by the regulator were available in Ireland at the end of last year. That ranked Ireland 16th out of the 27 countries surveyed.

Britain was ranked first with 88 per cent of medicines approved by the agency available in that market. That put it just ahead of Germany (86 per cent), Austria (84 per cent) and Denmark (83 per cent)

Among orphan medicines – drugs for very rare conditions (affecting fewer than one in 2,000 people) – just 29 per cent of new medicines was available in Ireland.

Given the small patient population, these drugs are generally among the most expensive in the market. In Ireland, where all drugs are assessed by the National Centre for Pharmacoeconomics, many are knocked back on cost grounds because they are not considered to be cost effective at the list price submitted.

1 Life as a Facebook moderator: ‘People are awful. This is what my job has taught me’
2 Suspicions rife as key Brexit trade talks begin in Brussels
3 Irish companies restrict travel over coronavirus fears
4 Corona beer firm reeling after 8% slide due to coronavirus
5 Flight attendant seeks High Court injunction against Aer Lingus
6 Coronavirus: Iseq down 11% in five days as global sell-off is worst week since 2008 crisis
7 How well paid do you think you are? Here’s how to work it out
8 Why Irish banks are now looking beyond vulture funds on problem loans
9 ‘The only time apartments were viable was in . . . Ballsbridge, Killiney and Dalkey’
10 Coronavirus wipes €6.7bn off value of shares in Dublin
Real news has value SUBSCRIBE