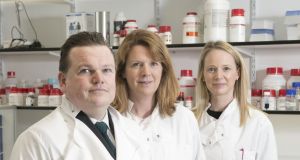 Serial entrepreneur Seamus Mulligan has led a $10 million (€12 million) fundraising for an Irish business at the cutting edge of cell therapy.

Avectas, based in Maynooth, is working on drug delivery technology that allows cells to be taken from people, who are often critically ill, and returned to them after they have been genetically engineered to address their illness.

Its approach makes cells extracted from a patient temporarily permeable, allowing for the introduction of edited DNA material. Avectas supplies the technology and the gene-edited material will come from the various drug companies with which they are working.

Cell and gene therapies are seen as the next great advance in pharmaceuticals, with the potential to transform the way diseases, particularly cancer, are treated. It is what is commonly referred to as personalised medicine.

The Avectas approach addresses two key challenges in immunotherapy – the reliance on viruses to help re-engineer cells and the length of the costly cell engineering process.

Chief executive Dr Michael Maguire says Avectas’ Solupore technology increases cell permeability in a way that is both gentler on the cells and cheaper than rival approaches. It also means the engineered cells can be returned to the host patient more quickly.

This has clear advantages for doctors, patients and bill payers.

Avectas’ Solupore approach also allows the genetically-edited cells to carry a bigger DNA “payload” than is possible with a virus.

Mr Mulligan, who is the largest single investor in Avectas, was instrumental in the restructuring of Elan after a share price collapse.

He subsequently built up and sold two businesses – Azur Pharma, which was acquired by US group Jazz Pharma in a $500 million all-share deal, and Adapt Pharma, the maker of Narcan nasal spray that is used to revive victims of opioid overdose, for up to $735 million to Emergent Biosolutions.

His partners in the $10 million fundraising are Eunan Maguire and David Brabazon, both of whom worked at Elan, and who have been among his senior managerial colleagues at Azur and Adapt Pharma.

Avectas is working with a number of pharma industry partners to commercialise the technology for cancer therapies. The $10 million fundraising is expected to fund the company over the next two years to the where its technology will be put through clinical trials.

The Maynooth University spinout, which is based at the MaynoothWorks incubator on the university campus, expects to add to its 24 staff on the back of the new investment.

Executive chairwoman Dr Mary Martin – another Elan alumnus – says the real excitement with cell therapy is that, for the first time, people are talking about the possibility of a “cure” for cancer. “This is an area where cure could be commonplace,” she says.

The latest funding brings to just more than $20 million the amount raised to date by Avectas. That includes almost €2.2 million from the EU’s Horizon 2020 research funding programme.

Dr Maguire says the key selling point for Avectas’ approach is that it “shortens the processing time against a backdrop where days certainly matter and even hours matter” to the patients relying on treatment.