Indivior shares tank after US indictment for illegal marketing 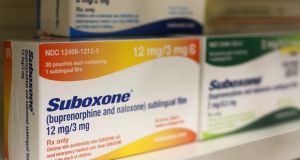 Shares of Indivior fell more than 70 per cent on Wednesday after the US Justice Department accused the British drugmaker of illegally boosting prescriptions for the film version of its blockbuster opioid addiction treatment Suboxone.

An indictment filed in federal court in Abingdon, Virginia, alleged Indivior made billions of dollars by deceiving doctors and healthcare benefit programmes into believing the film version of Suboxone was safer and less susceptible to abuse than similar drugs.

Shares in the company, already hurt by expectations of a slump in Suboxone sales due to the arrival of generic competition this year, fell 71.64 per cent to 30.05 pence, their lowest since listing in 2014.

The company has prospered as US officials ramped up efforts to combat an opioid epidemic that President Donald Trump has declared a public health emergency: US sales account for 80 per cent of its revenue.

In an indictment that charged Indivior and its subsidiary Indivior Inc with conspiracy, health care fraud, mail fraud and wire fraud, the government said it would seek to have it forfeit at least $3 billion.

Analysts said the company would struggle to pay a fine on that scale. It recorded revenue of $1 billion in 2018, and had net cash of $681 million at the end of the year.

“The headline potential penalties are severe but a settlement is also still possible,” Jefferies analysts said in a note.

“We believe it would require either a major rights issue or could lead the company to bankruptcy.”

Before Tuesday’s indictment, Indivior’s combined credit score – which measures how likely a company is to default in the next year on a scale of 100 (very unlikely) to 1 (highly likely)– was 5, Refinitiv Eikon data showed.

Shares in Reckitt Benckiser, out of which Indivior was spun in 2014, also fell around 4 per cent, putting it at the bottom of the London’s blue-chip Ftse 100 index.

Reckitt wasn’t charged but the indictment said the illegal marketing began before the spin-off. The company was not immediately available for comment.

Indivior said in a statement it was “extremely disappointed” by the department’s decision to charge it and added it would “vigorously” contest it.

Suboxone film is a US Food and Drug Administration-approved opioid used by people recovering from opioid dependency. The indictment said Indivior’s scheme led to thousands of opioid-addicted patients using the drug.

The ruling company has spent the past two years fighting multiple legal battles and patent disputes in the United States with companies including Dr Reddy’s, Teva and Mylan to block them from launching generics.

After losing a series of judgments, the drugmaker said earlier this year that it now faces potentially severe losses in market share to copycats in the immediate future.

Shares have lost nearly 90 per cent of their market value since Dr Reddy’s and Mylan’s generics were first approved by US regulators in June 2018.

The company is pinning its hopes on its long-lasting opioid addiction injection Sublocade becoming another blockbuster and helping it reduce the dependence on Suboxone. – Reuters