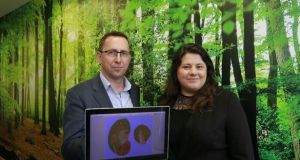 Deciphex, an Irish tech company which is using artificial intelligence (AI) to accelerate the delivery of pathology services, has raised €2.3 million in a new funding round.

Among those participating in the round were Irish investors Irrus Investments and Act Venture Capital. Other participants included US-based Nextsteps Ventures, Inovata Personalised Health Accelerator and GI Partners.

The start-up said it intends to use the new funding to accelerate research and development and market entry into preclinical/toxicologic digital pathology. It also intends to double staff numbers to 25 by early 2020.

Deciphex founder and chief executive Dr Donal O’Shea said diagnostics volume and complexity are increasing due to aging populations , with insufficient numbers of pathologists to cope with demand.

“This investment will have a huge impact on our ability to accelerate our commercialisation programme and to bring the best possible products to our customers and collaborators,” he said.

A serial entrepreneur, Dr O’Shea previously founded Slidepath, which was sold to British digital pathology group Genetix for €2.5 million in 2009. He is also a board member of UCD spin-out company Oncomark and Cork-based biotech start-up Microsynbiotix, and previously served in management roles in Danaher for a number of years, including as vice president of Leica Biosystems.

Based at DCU Invent, Deciphex was last year part of a successful consortium along with Janssen Pharmaceutical and PDS, to receive €2 million in funding under the EU’s Fast Track to Innovation programme.

It was also part of another consortium along with UCD, Royal College of Surgeons Ireland, the Mater Hospital and IBM to receive €5.6 million under the Government’s Disruptive Technologies Innovation Fund to purse the use of AI in colorectal cancer diagnosis and treatment.

Irrus Investments is a business angel syndicate and part of HBAN, a joint initiative of Intertrade Ireland and Enterprise Ireland. Among the start-ups it has previously backed include CroiValve, Adama Innovations and AventaMed.

Act Venture Capital, which established a near €100 million fund in 2017, is one of the Republic’s oldest tech-focused VC firms. Its portfolio includes Corvil, Channelsight , Cubic Telecom, Arralis and Silver Cloud Health.