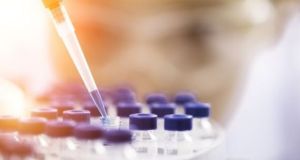 Reimbursement decisions in France and the UK led to revenue growth for one drug of 28.1 per cent in the first quarter of 2019 compared with a year earlier. Photograph: iStock

Irish pharmaceutical company Amryt said its revenues rose 13.3 per cent in 2018 to €14.5 million and the strong momentum continued into the first quarter of this year as revenues from its main drug Lojuxta picked up.

Lojuxta, which treats a rare genetic disorder that causes abnormally high levels of “bad” cholesterol, grew 14.2 per cent over the year to €13.6 million. A total of eight new distribution agreements were signed in 2018, bringing to 23 the number of countries covered. The drug also received reimbursement approval in the UK and France, with the first orders for the UK coming in late 2018.

Amryt’s lead development asset AP101, which is a potential treatment for the genetic skin condition Epidermolysis Bullosa (EB), has been given approval from the FDA to open clinical trial sites in the US. Amryt has also begun an early access programme for patients with EB in Colombia who are not eligible for its current trial, with the first shipments of product in late 2018.

“2018 was another strong year for Amryt as we continued to expand our business and make progress towards our goal of becoming a global leader in rare and orphan diseases,” said chief executive Dr Joe Wiley.

“We continue to evaluate new opportunities and expect to further deliver on our strategy to acquire, develop and commercialise orphan drugs as we move through 2019. We expect that this continued progress will bring us closer to realising our vision of becoming a global leader in rare and orphan diseases.”