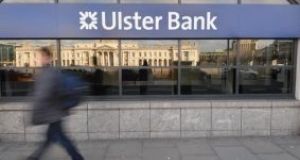 Ulster Bank last year booked a provision of €11 million to cover costs associated with a review of how it treated SMEs following the 2008 financial crash.

Ulster Bank in the Republic set aside €206 million last year to cover the costs of a mortgage redress scheme for customers who were denied a tracker interest rate on their homes loans over the past decade.

This emerges in the bank’s latest statutory accounts, published on Friday, and is to cover “potential remediation and project costs”.

Ulster Bank had previously set aside €5 million in 2015 to cover the cost of the scheme, which is part of an industry-wide review of tracker mortgages ordered by the Central Bank in December 2015.

The accounts state that the bank has begun to write to the affected customers.

The bank also last year booked a provision of €11 million to cover costs associated with a review of how Ulster Bank treated SMEs following the 2008 financial crash.

This sum is to cover the refund of certain “complex fees” and to manage a complaints review process.

It stems from the findings of the Tomlinson report in the UK in 2013, which was critical of Royal Bank of Scotland’s treatment of SMEs from 2008 onwards.

In addition, Ulster Bank was fined €3.3 million by the Central Bank last year for breaches of regulations in relation to money laundering and terrorist financing.

The accounts show Ulster Bank made a profit of €37 million in 2016, down from €1.09 billion a year earlier. This difference was due largely to a steep reduction in its impairment gain, down from €929 million in 2015 to €138 million last year.

In addition, its operating expenses increased by 40 per cent to €772 million. The was driven by €199 million of costs relating to the mortgage tracker review.

Staff costs reduced by 13 per cent to €241 million, driven by a decline in headcount and a €24 million reduction in its defined-benefit pension scheme costs. Employee numbers reduced to 2,451 from 2,685 a year earlier.

The bank closed the year with a core equity tier 1 ratio of 29.8 per cent, having paid a dividend of €1.5 billion to RBS. Ulster Bank chief executive Gerry Mallon described 2016 as another year of “solid progress”.

“This was driven by competitive rates, increased customer uptake of our enhanced digital offering and our continuing focus on customer service as we strive toward becoming the number one bank for customer service, trust and advocacy by 2020.”

The accounts show the aggregate remuneration for directors and key management rose to €5.2 million from €4.6 million in 2015.

Mr Mallon took over as chief executive in June 2016.

The bank closed the year with gross loans and advances of about €28 billion, down from €30 billion a year earlier as it continued to deleverage its balance sheet.