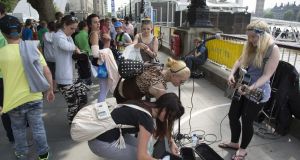 London is to introduce a contactless payment scheme for buskers in what organisers say is a world first.

Busk in London, a Mayor of London initiative, has partnered with technology company iZettle to hand performers the electronic readers that allow them to set a fixed amount of money to donate and accept contactless payments from passersby.

The project will allow street musicians across London to accept payments via cash, contactless cards, wearable technology and chip and pin.

Launching the scheme, London’s mayor Sadiq Khan said: “London is a powerhouse of music, having produced artists from Adele to Stormzy, and The xx to Dua Lipa. For London to maintain its status as a global capital of music, it’s vitally important that we support the stars of tomorrow.

“Busking helps emerging artists to hone their talent and gives them the chance to perform in front of huge numbers of people. I’m delighted that iZettle has chosen London to launch this innovative scheme – allowing artists to accept donations by card payment, as well as cash.

“Now, more Londoners will be able to show their support to the capital’s brilliant, talented street performers.”

The aim of the project is to increase the amount of money buskers receive, organisers said.

Charlotte Campbell, a full-time busker in London, has been trialling the project. She said: “I believe if street performers like myself don’t adapt to the cashless society we are edging towards, we’re at risk of becoming a dying art.

“I’ve only trialled Repeat Payments for two weeks and it’s has already had a significant impact on the contributions I’ve received. More people than ever tap-to-donate whilst I sing, and often, when one person does, another follows.”

iZettle and Busk in London have already started rolling the feature out to performers in London’s 32 boroughs, with more planned in the coming months.

There may be a perceived downside for buskers, however. The new system will leave a definite electronic trail for Revenue to check exactly what their income is from working the streets. – PA