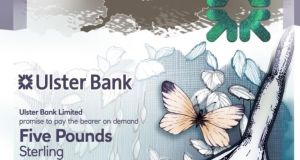 Ulster Bank is to introduce a new “vertical” polymer bank note in the North next year which will become the first note of its kind to enter circulation in either the UK or Ireland.

The bank’s new £5 and £10 notes are based on the theme “living in nature”, and will feature Strangford Lough, Brent geese, Lough Erne and the Irish hare.

The plastic notes will replace all of Ulster Bank’s paper notes when they enter circulation early next year.

Ulster Bank said the new notes would contain “advanced security features” which would make the notes harder to counterfeit.

Although Ulster will be a trailblazer with its new vertical note, it is not the first bank in the UK to introduce plastic bank notes.

Northern Bank, before it was acquired by Danske Bank, issued a special £5 polymer note in 1999 to celebrate the millennium, and the Bank of England introduced its first polymer note – a £5 note featuring Sir Winston Churchill – in 2016.