Debit card point of sale transactions up 5% in March 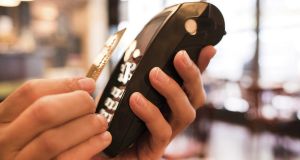 The total value of debit card point of sale spending was 3.4 times the value of credit card expenditure

Debit card point of sale transactions in March were up 5 per cent to €2.9 billion compared with the same month last year, according to the Central Bank.

Debit card point of sale transactions accounted for 55 per cent of gross new transactions on all cards in March.

Retail, services and social debit card expenditure all recorded increases, over the year to March 2018. Conversely, credit card spending fell relative to the same period in 2017, experiencing a decrease of €40 million.

The total value of debit card point of sale spending was 3.4 times the value of credit card expenditure. This compares with a ratio of just 2.2 recorded in January 2015.

Total ecommerce expenditure was €1.4 billion in March, with €985 million and €412 million attributable to debit cards and credit cards, respectively. The March value is 10 per cent higher than the previous year.

Ecommerce accounted for 27 per cent of new transactions on all cards during the month. It now forms 23 per cent of debit card spending and 50 per cent of credit card purchases.

Debit card point of sale spending had grown to almost 3½ times the value of credit card spending in March.

There were increases across all the main categories of spending, but social spending had the highest increase over the year, at 15 per cent.

Within services, utilities have increased by 22 per cent since March 2017. Within social, a similar trend is evident for restaurants/dining, which recorded a 23 per cent rise.

In contrast, credit cards experienced a decrease in total spending of 5 per cent, driven by falls in total retail expenditure.

Hardware experienced the largest reduction of any subcategory, decreasing by 12 per cent. Notable falls were also witnessed in health (11 per cent), education (9 per cent) and professional services (6 per cent) spending.

Three-quarters of all credit card expenditure in March was split between the services (38 per cent) and retail (37 per cent) sectors. In comparison, retail was predominant for debit cards, accounting for half of new spending, or more than double the expenditure on services.

A significant seasonal effect can be seen in the data, particularly for debit cards, with higher expenditures outside the State recorded in the summer months compared to the winter months.