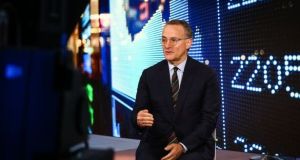 Private equity groups are lowering their standards over investment choices, raising money too easily and paying record prices in a shift that will lead to lower returns than the historical average for investors, according to Howard Marks, founder of Oaktree.

Mr Marks, a billionaire investor, said private equity groups were being pushed into accepting poor terms on deals. He said money managers have a “big impetus to get invested” even if it means backing bad ideas.

“When there’s too much money around, it creates really bad things,” he said. “You’ve got to think of the markets like an auction. There is an opportunity to lend money. Who gets to make the loan? The person who will accept the least.”

As of May 25th, there was $1.08 trillion of raised capital yet to be deployed, according to Preqin, the data provider.

He said the capital markets showed features similar to those in 2005 and 2006. “There is more money than there are good ideas. There’s very strong interest in getting ideas invested.”

He added that, with so much money available to them, buyout funds had “FOMO [fear of missing out] and people are abandoning the standards of the past”.

Asked if private equity was in a bubble, he said: “There is every chance that it is”, adding that “bubble is such a coloured word. I think we are in a highly elevated phase of the market”.

“It’s too easy for them to raise money. If they can place the money they have, they can raise more money and get more fees,” he said. “They are paying record-breaking multiples. You’ve got to worry when we are in the 10th year of an economic recovery.”

His remarks emerged at a time when buyout funds are not only raising record amounts of cash but are turning away billions of dollars as they struggle to cope with demand.

This is not the first time Mr Marks has warned about risk in private equity. He said last year that the wall of money being raised would lead to industry players trying to be more aggressive in order to hit their returns.

1 Suspicions rife as key Brexit trade talks begin in Brussels
2 Bank leaked my loan request to family who tried to rip me off
3 Irish companies restrict travel over coronavirus fears
4 Life as a Facebook moderator: ‘People are awful. This is what my job has taught me’
5 We have little chance of building enough homes to meet election promises
6 Rolls-Royce surges on hopes of solution to Boeing 787 engine glitches
7 People who think they are useless make the best managers
8 Dublin 4 guesthouse offers rare opportunity at €4m
9 Wall Street hammered on coronavirus fears while Dublin dips 4%
10 Eason acquires rival Dubray Books for undisclosed sum
Real news has value SUBSCRIBE