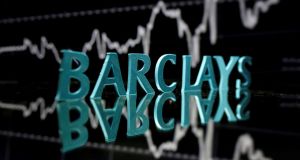 Britain’s Barclays bank has been privately exploring a possible merger with rival international banks, including Standard Chartered, in response to pressure from an activist investor. Photograph: Dado Ruvic/Reuters

One of Britain’s largest banks, Barclays, has been privately exploring a possible merger with rival international banks, including Standard Chartered, in response to pressure from an activist investor who has become one of its biggest shareholders.

The exploratory conversations are part of wide-ranging contingency planning being considered by senior board members in response to the pressure from Edward Bramson’s activist investment fund Sherborne, which recently acquired 5.4 per cent interest in the bank, people briefed on the talks said.

Two people close to the situation said John McFarlane, Barclays chairman, was keen on the idea of a combination with StanChart, at least in theory, and was supported by Sir Gerry Grimstone, who chairs its Barclays International unit.

One of the people said a private conversation had taken place between a director at each bank about the potential benefits of such a deal, but no formal or informal bid approach had taken place.

One senior banker involved in the potential deal said: “John /[McFarlane/] has a real affinity for Standard Chartered.” Another said of the potential deal: “It would be logical but I’d be very surprised if anything came of it.”

The possible combination with StanChart, which has a £25 billion market capitalisation, is only one of many options being “kicked around” by Barclays directors in response to Mr Bramson’s intervention. Barclays and StanChart declined to comment.

Jes Staley, chief executive of Barclays, met Mr Bramson in New York earlier this month and was told by the activist investor that he was still finalising his strategic proposals for the bank.

One person who knows Mr Bramson well said he was likely to call for Barclays to return to shareholders much of the £25 billion of capital tied up in its corporate and investment banking division by shrinking the long-underperforming unit.

Contingency plans discussed by some Barclays directors include:

– and “hypothetical combinations” with a range of other banks, including Deutsche Bank, Credit Suisse and DBS in Singapore.

There has been no formal discussion of the potential combination with StanChart on the Barclays board, said one of the people briefed on the situation, who added that it had not been the subject of any detailed work or been discussed between executives and non-executives of the bank.

One Barclays insider said it had been “scanning the horizon” like all bank boards do on a regular basis.

Mr McFarlane, who worked at StanChart earlier in his career, was said to have been pained at Barclays’ withdrawal from Africa, a decision taken more on the grounds of accounting than strategic rationale.

“Selling Africa pulled his guts out,” said one close friend. StanChart is one of the few banks with a strong pan-African franchise.

The deal would have the merit of bringing together two institutions with a neat geographic fit. It could also bring in a chief executive of the combined operation in the form of Bill Winters, the StanChart boss who was senior to Jes Staley, the Barclays chief, when the two men worked in the upper echelons of JPMorgan Chase.

Senior figures in the City of London have suggested in private that Mr Staley has been tarnished by a whistleblowing scandal and, if a recent rebound in performance is not sustained, could be replaced within a year.

However, a person familiar with the Barclays board said Mr Staley was “buoyant” after he survived a probe earlier this month by UK regulators into his attempt to unmask a whistleblower. He is also breathing a sigh of relief after a UK court this week dismissed criminal charges against the bank over a 2008 fundraising in Qatar, which came just a few months after Barclays settled a US investigation into mis-selling of mortgage securities with a smaller fine than expected.

Opinion appears divided on the industrial logic of any tie-up. “What would you put on page one of the deal announcement?” asked one City of London veteran. “I’m not sure there are many synergies.”

However, another long-time adviser to Barclays said “it makes perfect sense”, citing the funding benefits that StanChart’s large deposit base in Hong Kong and Singapore could bring to Barclays’ investment bank.

A second adviser to Barclays pointed out that both it and StanChart had extra capital requirements from regulators because they were considered globally systemically important banks and the likelihood of a merger would add to these, creating a deterrent to any deal.

“The capital impediment is quite difficult. It makes any deal really hard to do,” said the adviser, adding that “banks are still quite risk averse as the scars from the crisis are still very deep”.

Shares in Barclays and StanChart have remained in negative territory since Mr Staley and Mr Winters started in their current jobs in June and December 2015, respectively. They are both valued at about 30 per cent below tangible book value, indicating that investors expect them to earn less than their cost of capital.

Since making a failed offer for Royal Bank of Scotland in 1982, StanChart has been regularly cited as a likely takeover target. The bank, which has Singapore’s Temasek as its biggest shareholder, with 16 per cent, narrowly survived a bid from Lloyds in 1986 when rescued by investors dubbed the “three white knights” and it was later approached by several rivals, including Barclays. – Copyright The Financial Times Limited 2018