Will the anti-Draghi put the PIIGs in their place? 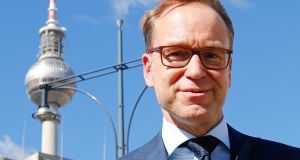 Next year there will be a changing of the guard at the European Central Bank as Bundesbank chief Jens Weidmann is being tipped to succeed current president Mario Draghi.

A financial hawk and a perennial critic of the ECB’s long-standing quantitative easing programme, Weidmann is often referred to as the “anti-Draghi”.

He typifies Northern European and German unease about the ECB’s €2.55 trillion stimulus programme designed to boost lending and stoke inflation, complaining it has let the PIIGs (Portugal, Italy, Ireland and Greece) off the hook in terms of reform while reducing interest rates at the expense of savers and pensioners.

Weidmann’s arrival and Draghi’s exit may ironically coincide with the re-emergence of Italy’s debt crisis. Last week a leaked memo suggested Italy’s populist coalition government was on the verge of asking Frankfurt to forgive €250 billion of Italian debt.

When asked if he was willing to succeed Draghi, Weidmann cryptically told Germany’s Funke Mediengruppe on Saturday, “every member of the governing council should have the willingness to contribute to monetary policy also in a different role.”

Designing a monetary policy that suits all 19 member states is close to impossible, but while Weidmann and Draghi appear poles apart, the German has noticeably moderated some of his more trenchant positions in recent months.

In an recent interview, the Financial Times compared him to the 12th-century archbishop of Canterbury Thomas Becket, referring to how an institution can mould the convictions of the person who runs it.

Becket was made archbishop of Canterbury by King Henry II to curb the power of the church – but ended up becoming its staunchest defender.

In his interview with Funke, Weidmann stepped up calls for an ending of the ECB’s asset purchases, noting the road back to “normalisation” would be a long one.