Fingleton challenges ex-regulator on lack of action on INBS 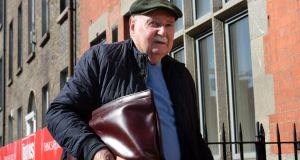 Former INBS managing director Michael Fingleton who is representing himself at the inquiry.

Former Irish Nationwide Building Society (INBS) managing director, Michael Fingleton, has challenged a one-time top regulator on why authorities took no enforcement action against the society in the lead-up to the financial crash.

It emerged from internal Central Bank memos referenced on Wednesday at an ongoing inquiry into INBS that regulators first raised concerns regarding the dominance of Mr Fingleton at the lender as far back as 1996. Mr Fingleton led the society for 38 years until 2009.

Appearing as the 22nd witness before the inquiry, Con Horan, who became head of banking supervision at the financial regulator in 2003, said he had been advised by his predecessor on taking up the role that INBS was “one of the more difficult” lenders that supervisors were dealing with at the time.

“There had been a series of issues with Irish Nationwide,” said Mr Horan, who went on to become head of prudential supervision at the regulator in 2006 before being seconded to the European Banking Authority (EBA) in 2011. “There was quite a degree of concern at the level of commercial lending and how the control environment kept pace with that.”

INBS, a once-small mortgage lender, became more involved in commercial property lending in the lead-up to the property crash. Such loans accounted for almost 80 per cent of its total book in 2008. The lender was seized by the State during the crisis amid a €5.4 billion taxpayer bailout before being put into wind-down.

Mr Fingleton, who is representing himself as one of four former INBS executives subject to the inquiry, asked Mr Horan why the regulators, if it had “serious issues” with the society, did not apply sanctions against it before the crash, as allowed by laws that came into effect in 2004, or threaten to remove the lender’s licence.

However, Mr Horan said a decision by the watchdog to increase its minimum capital target for INBS by 1 percentage point in 2004 to 10 per cent of risk-weighted assets, and by a similar amount in March 2008, reflected concerns about controls at the company.

He said this move was “a quite unique” action in Ireland at the time and sent a signal to credit ratings firms and the funding markets.

Mr Horan, who currently works with the EBA in London, had previously been a reluctant witness at the inquiry into a series of alleged breaches of financial law at INBS between August 2004 and September 2008.

A solicitor for Mr Horan had told the inquiry last October that the former top Irish regulator was not amenable to a subpoena from a different jurisdiction to give evidence in Dublin, and that the outcome of his previous extensive co-operation with other investigations and legal cases surrounding the banking crisis had been a “negative” experience.

While Mr Horan failed to show up at a scheduled appearance on May 14th as he was on holidays, he agreed last week to give evidence to the inquiry.

Mr Fingleton and his former finance director, John Stanley Purcell, who is also subject to the investigation, confirmed on Wednesday that they would give evidence next week as the first phase of the inquiry, into allegations that INBS’s credit committee did not fulfil all of its functions, draws to a conclusion.

It is not yet clear whether the society’s former head of commercial lending, Tom McMenamin, who is also under investigation, will give evidence. The fourth man subject to the inquiry, INBS’s one-time head of UK lending, Gary McCollum, is not being looked at in relation to workings of the credit committee.

1 Companies without tax clearance shut out of Covid wage subsidy
2 Avoca warns of redundancies due to coronavirus
3 Coronavirus: We must save lives but we also need to live
4 Over 400 complaints from migrant workers at meat plants lodged with WRC
5 McGann stepping down at troubled Aryzta
6 Errant texts highlight weaknesses in banks’ digital shift
7 Virgin Media vows to withhold sports channels until Eir ‘pays its bill’
8 Revised help-to-buy scheme opens for applications
9 Staff at Dublin and Cork airports to vote on work practice changes
10 Coronavirus spreads to sandwich king
Real news has value SUBSCRIBE