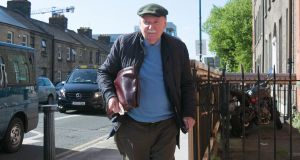 The former chairman of Irish Nationwide Building Society (INBS), Michael Walsh, told an inquiry into the lender that an erroneous report in early September 2008 on the company’s financial position triggered a €1 billion run on its deposits.

He said a Reuters report on September 5th, 2008, that INBS was in “talks with its lenders to avoid insolvency”, which was subsequently retracted by the news agency, “was completely untrue, but the impact of that was to cause a run on the society” and added to general uncertainty in financial markets at the time.

Dr Walsh said the lender’s cash resources fell by €1 billion to €3 billion by the end of September that year. It had spent the previous eight months building up liquidity after INBS decided in late 2007 to clamp down on new lending.

By August, 2008, he said that INBS’s cash position was the equivalent of 40 per cent of its loan book and was “streets ahead” of Irish rivals, who were “ploughing ahead” with lending.

INBS’s managing director, Michael Fingleton, who ran the society for 38 years until 2009 and is one of four men currently subject to the inquiry into various alleged breaches of financial law, disagreed with his former chairman on when the decision was made to stop new lending.

Mr Fingleton said he took an executive decision to that effect in October, 2007, while Mr Walsh recalled that the board resolved in December of that year to halt new lending, except where it had pre-committed to new facilities or it needed to provide more funds to protect its exposure to existing projects.

Dr Walsh was originally one of five men subject to the Central Bank-commissioned inquiry into a series of alleged breaches of financial services law at the now-defunct society between August, 2004 and September, 2008. However, he reached a settlement with the regulator in February, where he was fined €20,000 and banned from managing a regulated financial services provider for three years.

In his settlement agreement, Dr Walsh made admissions in relation to his ultimate responsibility as non-executive chairman of INBS for certain breaches by the lender relating to its management of loans and credit risk. However, Dr Walsh was not directly engaged in the day-to-day management of INBS.

Dr Walsh’s appearance before the inquiry on Monday and Tuesday made him the 21st witness after public hearings began in December. The current, initial phase of the investigation is centred around the workings of INBS’s credit committee before the financial crash.

A number of witnesses have told the inquiry the committee failed to live up to its terms of reference and consider cases of loans in large arrears, issues raised by internal and external auditors as well as regulators, or assess credit reviews of top borrowers.

Still, Mr Walsh said that he did not believe the credit committee would have made different lending decisions had it considered such issues or reports, as executives and managers on the committee would have had a “far ranging knowledge and understanding” of borrowers and the market.