Number of customers overcharged at Bank of Scotland, Danske and ACCBank rises sharply 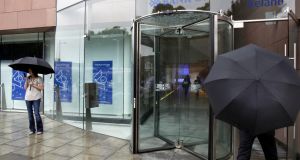 Three overseas banks that quit the Irish market during the financial crisis have seen their number of cases related to the tracker mortgage scandal – and other overcharging issues – more than double to as many as 655 accounts in just over a year.

In October 2017, Bank of Scotland, which introduced European Central Bank (ECB) tracker mortgages to the Republic in 2001, said that it had identified 184 customers who were hit by an industry-wide debacle where they were either denied their right to a cheap home loan linked to the main ECB rate, or put on an incorrect rate.

The figure has now increased to close to 500, The Irish Times has learned. “We have completed a review as requested by the Central Bank of Ireland, which identified a small number of accounts with errors related to tracker mortgages. The vast majority have been rectified and we expect to have completed this activity by the end of the month,” said a spokesman for Lloyds Banking Group, which inherited Bank of Scotland in late 2008 as part of a rescue takeover of HBOS. He declined to comment on the specific number of cases.

Danish group Danske Bank, which entered the Republic in 2005 by acquiring National Irish Bank before quitting the State’s retail banking market eight years later, has found that 115 customers were impacted by the fiasco, according to a company spokeswoman. That is up from 78 in November 2017.

Danske has identified 61 of the cases related to instances where borrowers were put on the wrong “margin” over the ECB rate as a result of “the bank’s error”, the spokeswoman said.

It has acknowledged that a further 54 customers “who may have had a reasonable expectation of a tracker rate on expiry of their fixed-rate mortgage, but where that option was not offered or made clear to the customer”, she said.

The bank, which has sold most of its Irish mortgages in recent years, said that it had made refunds and paid compensation to the “majority” of impacted accounts, with final payments set to be completed by the end of March.

“Danske Bank would like to sincerely apologise for the errors and any distress caused to impacted customers,” the spokeswoman said.

Meanwhile, ACC Loan Management, the remnant of ACCBank, has identified about 40 commercial and investment property customers who were charged the wrong rate, linked to European interbank lending rates, according to sources.

The figure marks an increase from the 11 accounts that the company, a unit of Dutch financial group Rabobank, had acknowledged in late 2017.

The Central Bank ordered current and former retail lenders in the market to examine their books for overcharging issues in late 2015. The regulator revealed last week that the total number of cases stood at 39,800 at the end of December – almost double the 20,100 conceded by the industry in October 2017.

The country’s six main mortgage providers – AIB and its subsidiary EBS, Bank of Ireland, Ulster Bank, Permanent TSB and KBC Bank Ireland – account for the vast majority of cases and have set aside €1 billion to deal with the scandal.