Online platform hits back at citywide clampdown in French capital 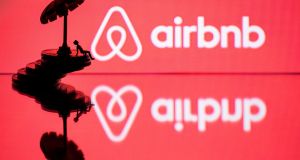 Under French law, home owners in Paris can rent their places on short-term rental platforms for as many as 120 days in a year. Photograph: Joel Saget/AFP/Getty Images

Airbnb said rules for short-term tourist rentals in Paris are excessively bureaucratic and might breach European Union standards, as the city’s authorities seek a €12.5 million fine against the online home-stay company for posting illegal advertisements.

The terms set by city hall “are inefficient, disproportionate and against European regulations,” a spokeswoman for Airbnb said in an email on Sunday, after Paris mayor Anne Hidalgo said in an interview with weekly Journal du Dimanche that the French capital’s authorities had sued Airbnb for posting 1,000 illegal rental listings.

Last year, the Irish Government announced new rules aimed at curbing the rapid expansion of Airbnb in Dublin with the intention to “unlock stock” that has moved from the long-term rental sector to the short term. The rules will come into effect on June 1st.

Under French law, home owners in Paris can rent their places on short-term rental platforms for as many as 120 days in a year. The owners must also register the business with their local municipality and ads have to bear the registration number.

Inspections conducted by the Paris municipality found that at least 1,000 ads posted on Airbnb’s site didn’t abide by the rules, Ms Hidalgo said. “We can’t accept that Airbnb and others don’t respect the law,” the newspaper quoted Ms Hidalgo as saying. “Our control inspectors have listed a first batch of 1,000 illegal ads, which could be fined €12,500 each.

“The goal is to trigger some electroshock and to end these uncontrolled rentals, which taint some Parisian districts.”

It particularly takes issue with city authorities’ contention that Airbnb must pro-actively monitor the lawfulness of ads on its website, the spokeswoman said in a phone interview. The San Francisco-based online platform has to abide by EU consumer rules, such as transparent pricing information.

But some European countries have tightened their oversight further, blaming Airbnb for spurring rental-price increases and creating a shortage of housing available to locals. “We hope to be able to work with all concerned players toward solutions that are really suited to French cities and their inhabitants,” the Airbnb spokeswoman said. – Bloomberg