Ulster merger with PTSB could boost profits by 50%, Davy says

Analysts see likely resistance to scheme in Dublin and Edinburgh 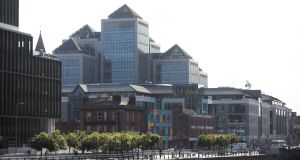 Davy estimates that Ulster Bank’s return on equity, a key gauge of a bank’s profitability, amounted to a little over 5 per cent in the first nine months of 2018, excluding exceptional costs.

A merger between Ulster Bank and Permanent TSB (PTSB) would boost the combined weak profitability of the two lenders by almost 50 per cent, according to an analysis by stockbroker Davy.

While the analysts expect Ulster Bank’s new chief executive Jane Howard to initiate a strategy review of the Royal Bank of Scotland (RBS) unit as soon as this year, they say any proposed tie-up between the two banks will likely meet resistance in Dublin and Edinburgh in the near term.

“In the current Irish political landscape, we would expect any combination to be heavily challenged – particularly with a minority government – and viewed as an erosion of competition rather than as a much-needed strengthening of the sector and, in fact, creating a true ‘third banking force’,” said the analysts, including Stephen Lyons and Diarmaid Sheridan.

RBS management and the UK government, which owns 62.4 per cent of the group, would unlikely to be interested in “doubling down” in Ireland with fresh investment, as the priority remains on moving excess capital in Ulster Bank to base. Ulster Bank returned, by way of dividends, €3 billion to RBS between since late 2016, following a £15 billion (€17 billion) parental bailout during the crisis.

However, the Davy analysts concluded that despite the obstacles to a deal, “we expect that a possible combination, although unlikely in the near term, will garner increased focus and speculation”.

While 75 per cent State-owned PTSB’s agreed to sell and securitise €3.4 billion of non-performing loans (NPLs) last year to lower its NPLs ratio from 28 per cent to below 10 per cent, its remaining business will only generate a 4 per cent return on shareholders’ equity for the foreseeable future, according to Goodbody Stockbrokers. That’s half the minimum rate that investors in a retail bank would expect.

Davy estimates that Ulster Bank’s return on equity, a key gauge of a bank’s profitability, amounted to a little over 5 per cent in the first nine months of 2018, excluding exceptional costs.

Davy analysts forecast that growing mortgage lending, increasing European Central Bank (ECB) rates lifting the pricing of tracker mortgages, and improving property market will help Ulster Bank and PTSB to boost their pre-tax profits by the end of 2021 to €136 million and €113 million, respectively. However, cost savings and other synergies from a merger would boost these figures by 46 per cent to a combined €371 million, they said.

That would deliver a return on equity of almost 10 per cent for the merged entity, which is much closer to RBS’s group target of 12 per cent, the added. The Davy analysts not explore the mechanics of a potential deal in their analysis, which is part of a wider report on RBS.

Last April, then chair of the ECB’s banking supervision arm, Daniele Nouy, suggested to Department of Finance officials on a visit to Dublin that a merger between PTSB and Ulster would boost the health of the Irish financial system.

A spokeswoman for Ulster Bank and spokesman for PTSB declined to comment.

RBS carried out its last strategic review of Ulster Bank in 2014, resulting in the group reaffirming its commitment to the Republic. The group subsequently aligned its Ulster Bank business in Northern Ireland more closely with its NatWest division.

1 How can I view my dead brother’s will if I’m not the executor?
2 Investors pile into property as turnover in build-to-rent sector reaches €2.54bn
3 Glencore to shake up its top tier with younger leaders
4 Provisional liquidator appointed to Dublin engineering firm
5 Travel costs for IDA chief topped €45,137 last year
6 Bursting of Tesla bubble a case of ‘not if, but when’
7 Mount Charles wins €10m catering contract at Maynooth University
8 Kerry’s Chinese sales set for 30% hit from coronavirus
9 Germany drops opposition to fiscal boost in event of downturns
10 Analyst doubles projection for Tesla shares to $1,200
Real news has value SUBSCRIBE