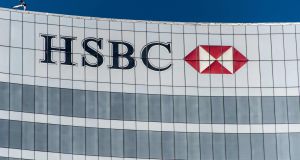 HSBC ousted John Flint as chief executive after just 18 months in a shock move that the chairman of Europe’s biggest bank said was needed to speed up progress on priority areas such as the turnaround of its US business.

The chief executive’s exit was a result of differences of opinion with chairman Mark Tucker over Mr Flint’s more tentative approach to cutting expenses and setting revenue targets for senior managers to boost profit growth, a person familiar with the matter said.

HSBC disclosed the departure of Mr Flint (51) alongside its half-year results on Monday as it forecast a gloomier outlook for its business, with an escalation of a trade war between China and the United States, an easing monetary policy cycle, unrest in its key Hong Kong market and Brexit.

HSBC, which makes more than 80 per cent of its profit in Asia, said that its global commercial banking unit head Noel Quinn will be interim chief executive.

Shares in HSBC, which fell nearly 14 per cent during Mr Flint’s tenure, were down 1.7 per cent in London in midday trading, even though it reported a 16 per cent rise in profit and a revealed a share buyback of up to $1 billion.

Mr Flint, who previously ran London-headquartered HSBC’s retail and wealth management business, was chosen as chief executive in February 2018 in the first major decision by Mr Tucker, who told Reuters:

“It’s the right time for change, and doing it clearly and decisively from a position of strength is very important.”

A key difference with Mr Tucker was over Mr Flint’s efforts to turn around HSBC’s under-performing US business, the person familiar with the matter said. HSBC declined to comment.

Mr Tucker, who became HSBC’s first externally appointed chairman when he joined HSBC’s board in late 2017, said that the search for a new chief executive, which will include both internal and external candidates, could take up to a year.

HSBC will also cut around 2 per cent of its workforce or around 4,000 jobs this year as it seeks to reduce costs, chief financial officer Ewen Stevenson said, adding it will pay out a total of around $650-700 million in severance costs and the reductions will be biased towards senior managers.

China’s Global Times ran an editorial on Friday saying it “feels heat on Huawei CFO case”, suggesting HSBC had erred in co-operating with US authorities and it could face penalties.

“Our business operations in China continue as normal,” Mr Tucker told analysts on a conference call when asked whether the bank faced blacklisting in China over the Huawei situation.

HSBC executives at the time of his appointment saw Mr Flint as a safe pair of hands and a natural successor to mentor and previous chief executive Stuart Gulliver.

Outlining his strategy in June last year, Mr Flint set out plans to invest $15-$17 billion in the next three years in areas including technology and China.

HSBC said it no longer expects to achieve the targeted 6 per cent return on tangible equity (ROE) by 2020 in the US, where it has struggled for years to build scale and compete. That missed goal is still below the overall group aim of getting to more than 11 per cent ROE by 2020.

HSBC hired Citigroup veteran Michael Roberts in July to head its US business, in a renewed effort to turn it around.

The US business is not “getting the proper returns”, HSBC’s chief finance officer Stevenson told Reuters, adding the unit has also been hit by the change in the monetary policy cycle.

HSBC’s investment banking business has also struggled in recent years as it lost a string of senior executives and saw US rivals cash in on booming domestic stock markets.

Revenues in HSBC’s global banking and markets division fell by 3 per cent in the first half compared with the same period last year.

HSBC’s pretax profit for the first six months of 2019 rose to $12.41 billion from $10.71 billion in the same period a year earlier, helped by a surge in retail banking and Asia revenues.

“Interest rates in the US dollar bloc are now expected to fall rather than rise, and geopolitical issues could impact a significant number of our major markets,” HSBC said.

The US-China trade war has taken its toll on trade-focused banks like HSBC and rival Standard Chartered, which last week warned of an impact on its business customers from the escalating tensions.

Mr Tucker played down the impact of protests in Hong Kong against an extradition bill which have evolved into a broader anti-government backlash and said HSBC remained confident about the future of the Asian financial centre.

Analysts had been watching closely to see whether the bank would announce a fresh buyback, as a failure to do so would have been read as a sign of mounting caution by HSBC’s management.

Prior to the latest buyback announcement, HSBC had purchased more than $6 billion of its own shares since 2016.