Lender born out of MBNA ‘at the start’ of leveraging relationships, says CEO Chris Paul 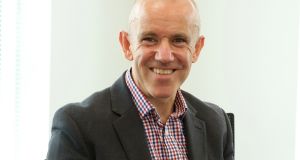 Chris Paul: “I genuinely think the Irish consumer is underserved”

It’s barely two months since the ink dried on the completion of Bankinter’s takeover of Irish-based consumer finance company Avantcard. And already Avantcard is readying up for the next stage in its growth as it eyes a move into car finance and SME lending – but not mortgages.

Avantcard was born out of US credit card company MBNA, which had a substantial presence in Carrick-on-Shannon, Co Leitrim. It employed more than 1,000 people before pulling out of the market in 2012. The business was subsequently acquired by US private equity fund Apollo, and chief executive Chris Paul joined from Barclaycard in October 2017.

But, as he notes, until the sale to Bankinter, “there was always a question mark around the long term future. Any doubt about the future is gone now.”

Bankinter is Spain’s sixth largest bank, and its acquisition of Avantcard is part of a wider push into consumer finance across Europe, which includes the purchase of Barclaycard’s Portuguese unit in 2016.

The deal, which was first announced last September, is a good fit for the Spanish bank, says Paul. “They’ve bought the Irish business with good reason; it’s a well run business that’s profitable, with healthy returns.”

How profitable? “We’re profitable, that’s all I can say,” he says.

After a period of retrenchment following the departure of MBNA, the business is very much back in growth mode, and employment is back up to about 250, having fallen to the low 100s at one point.

Today Avantcard’s loan book stands at around €400 million (€290 million of it in credit cards), up from about €280 million in October 2017. And the focus will be on growing this.

“We’re really only at the start,” says Paul, adding that the next stage is figuring out how Avantcard can really maximise the potential of the deal.

In the short-term this is likely to see the business expand upon its current portfolio of credit cards and personal loans into SME lending and car finance. Some of this will be done via additional partnerships, such as those it has embarked upon with Chill and An Post. It also acquired Tesco’s Irish credit card portfolio consisting of some 27,000 customer accounts.

“In all the business we do we do want to compete on rate, but do I think we’ll be the cheapest in the market? No. Being the cheapest can be risky and end up in a race to the bottom . At the end the customer gets what they pay for.”

Expanding its current remit in personal lending is also on the agenda, such as ramping up its partnership with An Post. “We’ve just scratched the surface; there are a lot more things we can do together,” he says.

One challenge in growing the loan book while there is a dampened appetite for consumer lending.

“It’s nowhere near as strong as it was at the height,” he says, though he notes that it is “coming back, and it’s coming back in a considered thoughtful way ... I don’t think it’ll go back to the levels it was at.”

Leveraging its relationship with Bankinter will also be a focus.

“As we really move forward there are going to be many opportunities to look at; synergies and opportunities that they can help us accelerate our plans,” Paul says.

Mortgages, however, are seen as a step too far – at least at this point. Bankinter’s acquisition of Avantcard had raised speculation that, with the added heft of the Spanish full service bank, it might look to link up with An Post as it sought to enter the mortgage market with discount rates. Avantcard, after all, already has a consumer finance relationship with the postal distributor.

However, Paul says such a move was never on the agenda.

“We didn’t pitch for that,” he says of An Post’s tender for a mortgage partner, though he says he is excited about An Post’s plans for the mortgage market.

He also dismisses the potential of a banking licence for Avantcard – at least in the near future . “It isn’t in our immediate plans,” he says, adding: “I’m always a bit nervous about losing focus.”

This means that deposits – despite the significant demand for savings accounts with a decent return, and current accounts – are also not his radar.

“It’s something we could end up doing further down the line,” he says.

One area Avantcard hopes to distinguish itself in is innovation, with the aim of offering the consumer more.

“I genuinely think the Irish consumer is underserved,” Paul says, noting that there are very few players in the market, and what is generally on offer is “all vanilla”.

He acknowledges that this is not purely from a lack of interest among rival lenders but also because the Irish banking system had been so preoccupied since the financial crash with putting its balance sheets back in order, returning to profitability and reducing what remain of oversized portfolios of non-performing loans.

And he also stresses that Avantcard has little interest in jumping at every market innovation for innovation’s sake.

“We’re trying to lead the charge in terms of disrupting the market,” he says. However, he concedes that at present Avantcard has no nifty app for its customers, nor does it offer Google or Apple pay.

“But it’s coming, absolutely,” he says. “I’ve resisted so far just having an app for an app’s sake. It needs to meet a business objective or customers’ needs.”

Broadening its reach into holding cryptocurrencies on its platform – against the background of Facebook’s recent foray into the market – is also not on the agenda. “I can think of 100 other things we need to focus on first,” Paul says.

It’s all a long way from his early days as a management trainee with the regional Yorkshire Bank. Banking, and card services, have been revolutionised over the intervening 35 years. And Paul has been at the coalface for much of that. He was a member of the team that introduced the Switch electronic debit payment system into the UK market in the late 1980s.

Since then he has specialised in card services during stints at Visa, American Express, Citibank International and Barclaycard, before stepping into his current role.

One big innovation Paul says the Spanish group has brought into the Irish market is how it prices personal loans. Typically, lenders offer a flat rate but, as Paul notes, not every borrower has the same risk profile.

“What we’ve done is moved away from a one size fits all approach to a more nuanced one. We’ve introduced personalised pricing which allows us to take a more granular view of an application.”

Credit ratings are derived from credit reports as well as the company’s own analysis: customers with better ratings will pay less for their loans. At present, for example, someone applying for a personal loan could end up paying between 9.2 per cent and 11.9 per cent on their loan depending on how well they are rated.

Avantcard says the application process is more “transparent” than borrowers are likely to find with most loan providers, with the various price points in each loan-amount band signalled at the outset.

When applying for a personal loan, customers select from three profiles – Great, Good or OK – and that gives them an illustrative example of the rates associated with their profile. Paul says many of the initial applicants were awarded more preferential risk profiles, and therefore lower interest rates on their loans than they had originally selected for themselves.

At the other end of the scale it means consumers with poorer credit histories, who might be denied access by other lenders, can at least borrow money, albeit at a higher interest rate than others.

With respect to Ireland’s insolvency rules, which were introduced some seven years ago, and which offer the potential for debt write-offs on unsecured debt, Paul says Avantcard’s approach is more about “prevention than cure”.

“We want to make sure we make good lending decisions,” he says.

With Brexit yet again on the horizon, Paul says the business is “fully mobilised” in its preparations. However, the potential impact on the Irish economy – and on consumers’ ability to repay their loans - is as yet unclear.

“Hopefully any impact will be short-term. The Irish are resilient,” he says.

While Avantcard recently opened a small Dublin office in Sandyford – “we opened the office for staffing reasons” – the company’s main base remains in Carrick-on-Shannon. For Paul, an Englishman, this means a weekly commute.

He says it’s a reflection of the potential he sees in the Leitrim-based venture given the toll it takes on his personal life. A so-called “super-commuter”, he leaves his home in west Sussex every Sunday afternoon to fly from Gatwick to Dublin and then drives up to Carrick, ensuring he’s there early Monday morning. During the week he stays locally in a hotel. On Friday afternoons he makes the reverse journey, arriving home at about 7.30pm.

“I’m used to it now...but I do miss my wife and kids,” he says, adding “going to Carrick every week is a pain; but despite that I love the fact we’re based in the northwest,” he says, pointing to the “highly engaged and motivated” workforce.

In any case, he says there’s a good reason for the travel. “The opportunity I have in Ireland with Avantcard I certainly couldn’t get in the UK, and I’m not sure I could get elsewhere. I’m more convinced about that than ever. Business is going incredibly well, and it promises to get bigger and better.”