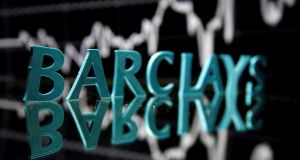 Barclays: reiterates warnings that keeping a tight lid on costs is a “priority”. Photograph: Dado Ruvic

Banking giant Barclays has cheered its highest half-year profits for nearly a decade, but warned costs will need to be slashed over 2019.

The lender reported an 82 per cent surge in statutory pretax profits to £3.01 billion for the six months to June 30th as it put hefty mis-selling charges and settlements behind it.

On an underlying basis, interim pretax profits fell 15 per cent to £3.1 billion.

The lender reiterated warnings that keeping a tight lid on costs is a “priority” and said they will need to be reduced over the year. It revealed 3,000 jobs had been cut in the second quarter out of an 83,500-strong workforce.

The first-half statutory profit compares with £1.7 billion a year earlier, when it was hit by costs of the payment protection insurance (PPI) scandal and a £1.4 billion settlement with US authorities over its sale of mortgage-backed securities in the lead-up to the financial crisis.

The group did not put any further money aside for PPI mis-selling claims, in contrast to its rival Lloyds Banking Group on Wednesday, which revealed another £550 million hit. – PA

1 State’s biggest landlord records 30% rise in rental income
2 What will the office market look like after the great remote working experiment?
3 Irish tourism must also help itself to survive the pandemic
4 Facebook agrees Irish wind farm deal with Brookfield
5 ‘Saudi Arabia is where the opportunities will happen in future’
6 Trump signs executive orders banning TikTok and WeChat
7 Project Eagle: What was it and why is it in the news?
8 How your country’s history affects the way you think
9 How to build your staff’s resilience while working remotely
10 More than 1,200 tracker mortgage complaints still awaiting ombudsman ruling
Real news has value SUBSCRIBE