Former Anglo junior bondholders to recover all of their money 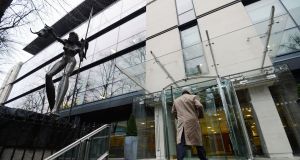 The IBRC offices in 2013 at Connaught House on Burlington Road.

A group of Anglo Irish Bank junior bondholders, who rebuffed attempts to make them share the failed lender’s losses, are now set to recover all of their money, the liquidators of the group’s assets have conceded.

Anglo Irish Bank merged with Irish Nationwide Building Society (INBS) in 2011 and renamed Irish Bank Resolution Corporation (IBRC), before the combined entity was put into liquidation two years’ later. Taxpayers were forced to commit €29.3 billion to Anglo Irish Bank and €5.4 billion to INBS during the financial crisis, and stand at the back of the queue in terms recovering these funds from the wreckage of both lenders.

The liquidators, Kieran Wallace and Eamonn Richardson of KPMG, revealed on Tuesday that that senior unsecured creditors will have receive the remaining 50 per cent of what they are owed in the coming weeks, having paid an initial 50 per cent over the past two years. The State is IBRC’s biggest creditor in this category, owed €1.2 billion.

In addition, the liquidators said that the State stands to recover some of the bailout funds in time, “following repayment of other creditors, including subordinated bondholders”. They did not say when such payments may take place.

While most junior bondholders in Anglo Irish Bank agreed in 2010 to accept 20 per cent of what they were owed, after the Government threatened to inflict bigger losses on them, a group of such creditors, owed about €270 million, refused to take part in the exercise.

One holder of subordinated bondholders, Munich-based Xaia Investment, then known as Assenagon Asset Management, which was owed €17 million, took its case to the UK High Court as it resisted losses being imposed on it – and won. The court ruled in July 2012 that the measures the Government had used to persuade bondholders to capitulate amounted to a “negative inducement”.

Many of the €270 million of junior bonds were bought by distressed debt and hedge funds during the crisis at deeply discounted rates.

News that the holdout junior bondholders are in line to receive 100 per cent of what they are owed is likely to prove politically contentious. Then Central Bank governor Patrick Honohan told Department of Finance officials in March, 2015 there was a “moral case” for them to find a way to prevent these creditors recovering anything from the remnants of Anglo Irish Bank.

Then taoiseach Enda Kenny said in December , 2014 that he did not see any circumstances where junior IBRC bondholders being repaid, while his then tánaiste Joan Burton insisted months later that the Government would use “all the legal means at our disposal to resist any attempt by these junior bondholders to extract any money from the Irish Government”, which nationalised Anglo Irish Bank in January 2009.

While the IBRC liquidators had envisaged only announcing this month that the would pay out a third 25 per cent incremental “dividend” to senior unsecured creditors, sources said that a decision was arrived at on Monday whereby valid claimants would receive the remainder of what they are owed, shifting the focus to the junior bondholders.

“The confirmation of this final dividend payment highlights the success of the liquidation to date, which has far exceeded our expectations at the outset,” said Minister for Finance Paschal Donohoe on Tuesday. “This brings clarity to all admitted unsecured creditors that they will receive 100 per cent of what has been owed to them since IBRC went into liquidation in February 2013.”

Mr Donohoe said that the €600 million the State is due to receive in the coming weeks will be used to bolster the cash balances of the State’s central fund “and thereby reduce the required level of borrowing”.

1 HSBC board rethinks overhaul and seeks even deeper cuts
2 ‘Over 1,000’ pubs have interest in Covid-19 insurance test case
3 Fruit and vegetable firm obtains interim court orders against technical manager
4 Reopening economy does not cause coronavirus spike – researchers
5 Will remote working mean an end for the corporate HQ?
6 EU parliament may block fund unless it has grants which do not need to be repaid
7 Eir sells mobile mast infrastructure company for €300m
8 Pricewatch: Coronavirus has given us four categories of shopper
9 A Smigin of language goes a long way for well-travelled Cork woman
10 Pilita Clark: A lot of us are losing it in lockdown – but we really shouldn’t
Real news has value SUBSCRIBE