Scheme provided through Finance Ireland is a six-year facility 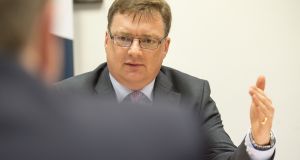 Together with Finance Ireland, the six-year loan facility will support offerings in areas including hire purchase, leasing, working capital and agri asset finance.

The SBCI lends to SMEs through financial institutions known as “on-lenders”. In the case of this €75 million facility Finance Ireland will act as the on-lender. The organisation also works with AIB, Bank of Ireland and Ulster Bank.

SBCI’s total commitment to Finance Ireland has now reached €126 million following the deployment of €51 million in funding agreed in 2015.

“Today we are increasing our support to Finance Ireland which will help drive competition in Irish SME lending, making it easier and cheaper for them to access the finance they need to succeed,” said SBCI chief executive Nick Ashmore.

Data from the Central Bank on Tuesday showed net lending to Irish SMEs fell by €561 million in the third quarter of the year. Gross new lending, however, increased €103 million to €1.2 billion in the quarter. The weighted average interest rates on outstanding loans stood at 3.44 per cent while the rate on new drawdowns was 4.03 per cent in the quarter.

“A modern growing economy requires funding through bank and non-bank sources and Finance Ireland is an example of the SBCI’s effectiveness in increasing the range of options open to SMEs,” he said.

Since its inception in 2014, the SBCI’s main sources of funding have included the European Investment Bank, the Council of Europe Development bank and debt issued by the National Treasury Management Agency.

“We are delighted to further develop our relationship with SBCI. The SBCI funding has been a significant benefit to the many hundreds of SME customers we deal with on a daily basis, and this new facility will ensure that benefit continues into the future,” Mr Kane said.